A while ago, Nora received an email from her aunt.

“Tonight [your uncle] and I watched a TV show where supposedly an FBI agent was killed. The graveside ceremony included a eulogy and concluded with each person taking a turn to shovel dirt into the grave on top of the coffin. That seemed weird to me. The deceased character was not Jewish. Have you seen such a funeral, or was that just sloppy writing? Just wondering   -   B."

I was raised Catholic, so I'm NOT the definitive authority on Judaism or Jewish Traditions. Having attended seminary, though, I'm a big fan of ceremony and its benefits, especially around life transitions. So when Nora read me this email and asked if I'd like to write about it, I was tempted... apprehensive about whether I'd be able to do justice by a faith tradition that's not my own, but definitely eager to learn more and discuss the nuances I would be able to grasp.

Aunt B. is right--shoveling dirt into a grave after the casket has been lowered IS a time-honored Jewish tradition. Physical contact with the earth is important, so ideally, the casket is buried directly in the ground without a vault or grave-liner around the casket. If cemetery policy requires a liner or vault, earth is put into the bottom of this container so that the casket will make contact with the soil. 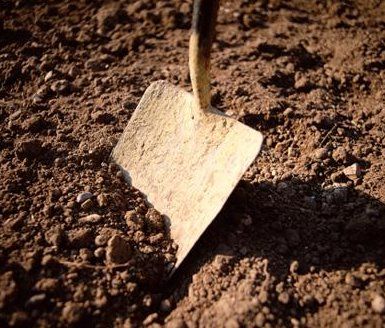 At the cemetery, the soil from the grave is in a pile next to the open grave. Shovels stand stuck in the dirt for those present to use to shovel the soil into the grave after the casket has been lowered. I've also learned that at first, the back of the shovel is used to demonstrate an initial reluctance to say goodbye in such a final way. Only after is the correct side of the shovel used to complete this somber task.

A mourner approaches the mound, helps themselves to a shovel, shovels some soil into the grave, and then places the shovel back in the mound. This is an important, non-verbal demonstration that no one obligates anyone else to engage in this task--when you approach the shovel, you're taking your own initiative to make the choice to do this.

The specific question was whether this practice takes place outside of the Jewish tradition.

Turning to my friends on Facebook, I asked if anyone had experienced hands-on participation at the graveside and what this may have felt like.

A friend in Ireland told me about her cousin's burial--each cousin was given a rose, and they took turns dropping their roses on the lowered casket. It felt comforting to her that she had touched a little bit of beauty and that it would accompany him. Some friends found it too emotionally upsetting to witness the lowering of the casket or the closing of the grave. This makes sense too--not every ritual will be helpful to every person.

One of the most moving stories I've heard comes from Brian Flowers, Cemeterian at The Meadow and Past President of the Green Burial Council. This story takes place at The Meadow, a green cemetery in Ferndale, Washington. As a green cemetery, one of the ways the staff limits their carbon footprint is by forgoing the use of heavy machinery like tractors and backhoes. Graves are dug by hand, and the soil is in a mound next to the grave, so those gathered can take turns closing the grave. Immediate family members typically start, and after 4 or 5 shovelfuls, the next people tap them on the shoulder to take over, like cutting in at a dance. Brian tells me this process tends to unfold pretty organically--people naturally and instinctively know what to do and when without needing much direction.

This was how it started with the burial Brian was telling me about. A young man had been murdered, and his father, as part of the grieving process, had a deep, primal need to maintain visual contact with his son's remains until the burial was complete. After the body had been lowered into the grave, the shared communal task of closing the grave began. After about 10 or 15 minutes, Brian tells me, the young man's father was the only one shoveling. Those gathered could see and feel the intensity of what he was doing for his son; a circle formed around him to bear witness to his work, and to offer an emotionally supportive presence.

"Shoveling," as Brian points out to me, "is not a terribly cerebral task. It allows the brain to turn off for a while, making room for the heart to do the work of processing the grief." That's certainly what happened for this young man's father--work with the shovel provided a very physical way for this gentleman to non-verbally express the emotions he was trying to process. Feelings, I've found, often confound us with their inability to be effectively conveyed with mere words.

For many people, there's a very real emotional value to going through this physical experience. I wondered out loud to Brian if this value influences the placement of this ritual within a spiritual community context, like the Jewish tradition. Brian pointed out that this ritual is an important part of the Lummi Nation's practice, too. (I had to make a mental note of this for Aunt B.) I’ve also seen people toss rose petals or origami paper cranes into a grave after the casket has been lowered. 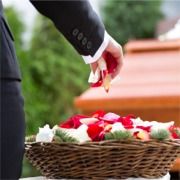 We encourage families make choices that are meaningful to them—you shouldn’t have a certain kind of funeral just because someone told you that is what is expected, or what is “traditionally” done. People should be free create and engage in ceremonies that have meaning for them. If ceremonies from other religions or cultures have meaning for you, please incorporate those traditions into your plans. Talk about it with your family, your friends, and your community.

Chris Ronk is a licensed funeral director. He has worked in the funeral industry since 2006.