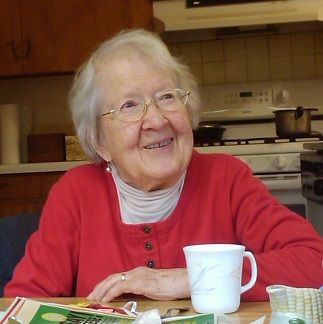 Ironically, Beryl Neff died one month shy of the Oct, 24, 2001 passing of her husband and soul mate of 61 years, Harold Neff.

Beryl Neff was born Jan. 30, 1917 in Sparks, Nevada to Betty and Frank Marlar one of three children. In later years Beryl would say she was a quiet but inquisitive child, a voracious reader. The love of books, magazines and newspapers—including the Everett Herald -- carried over to her last days when, she groused, her deteriorating eyesight made reading almost next to impossible.

After her parent’s divorce, Beryl joined her mother in San Francisco, California where she resided until 1948.

In the early 1940s, she received a degree as a registered nurse. Besides working in hospitals in San Francisco and Everett, Beryl was the “go to” nurse in an extended family that grew by 12+ by marriage in 1940. Beryl’s oldest son, Andy, recalls that nearly every Neff and Marlar family member stricken with a serious illness, Beryl Neff was an attendant nurse.

It was in 1939 Beryl Marlar, 24, was introduced by Emma Neff Hopkins to her brother, Harold, 25. In 1940 they became Mr. and Mrs. Harold Neff. It was a union resulting in four children, and eventually, seven grandchildren, twelve great-grand children, and three great-great grand children.

It was in 1948, the H.A. Neff’s—now comprised of two kids, Andy and Kristin--moved from San Francisco to Washington State and rural Snohomish County’s Lake Stevens. Harold, born in Granite Falls, returned home having secured employment as a Machinist.

It was also in 1948 that the Neff family moved into a 3\4 acre home—rumored to be the previous residence for Prohibition-era moon shiners—at 2024 Cedar Road in the northern Lake Stevens watershed. Stately Neff Manor as it was known was given many remodeling jobs in the course of the next 61 years—including the indoor swimming pool Harold built beginning in the late 1960s and opened for business in 1970.

But one constant was the thriving vegetable garden. Home-grown organic vegetables, canned fruit from the estate’s apple and pear trees and grape vineyard were a constant for a family that grew to four by 1954 with the arrival of son David and daughter Barbara. Beryl Neff in time became a certified Snohomish County Master Gardener with her garden proof of her gardening prowess.

Another one of Beryl and Harold’s passions was hunting for mushrooms. It almost proved a fatal attraction one afternoon in the late 1980s.

Harold, then not relegated to a wheel chair from diagnosed Muscular Dystrophy, waited as he usually did for his wife and a friend on the outskirts of a wooded area off the Mountain Loop highway as the women searched for delectable mushrooms. When day turned into night and the women did not reappear, Harold drove back to Granite Falls to notify authorities.

What followed was a media feeding frenzy with Seattle TV stations camped out on that logging road, capturing the worried face of a pacing Harold Neff who offered a terse no comment to the inquiring Media. After a night out in the Mountain Loop Highway wilderness, Beryl and her friend were led out of the outback by authorities, no worse for wear but hungry.

Beryl continued as a member of the Snohomish County Mushroom Society, attending into her late 80s the annual Fall show at Legion Park in Everett.

It was in the early 1960s—after the 1962 Cuban Missile Crisis that saw the world teetering on nuclear Armageddon—that Beryl Neff became a committed Snohomish County peace activist.

As the years progressed and Vietnam War morphed into the endless War on Terror with US wars in Afghanistan and Iraq, Beryl kept protesting smiling with pride when a grandchild called her an authentic “raging grandma.” She was among the last protestors at the now defunct anti-war vigils outside the Everett Post Office on Hewitt Avenue.

Beryl’s training as a Registered Nurse was put to the test when she became the principal caregiver for Harold in 1991 after the latter’s lengthy recovery from open-heart surgery caused his muscles to atrophy from muscular dystrophy. Harold, thanks to Beryl’s care, lived another 10 years, dying at age 85.

Beryl remained a resident of Stately Neff Manor, living alone or with family members until 2011 when recovery from a stroke dictated a change of residence. For four years she was a resident of then-Merrill Gardens at Mill Creek that morphed into Brookdale, an assisted living facility, save for a successful recovery in a skilled nursing facility from a broken hip.

Beryl was popular among residents and staff, holding court in the cafeteria with friends at the evening meal. With the exception of daily changing of elastic stocks to prevent her feet from swelling, Beryl was fiercely independent not requiring any other assistance from staff as she went about her days reading newspapers, magazines and books until her eye sight deteriorated. She could be seen, as late as her last day on earth, strolling the corridors outside her apartment with her walker, always with a smile.

Beryl Neff outlived her husband, his 12 siblings and her two siblings, and almost every one else from a circle of acquaintances hailing form what one pundit termed America’s Greatest Generation. A few years ago, she seemed to relish living to be 100. Recently, she seemed resigned that wasn’t likely.

Besides her husband Harold, Beryl was preceded in death by daughter Kristin; and brother and sister, Vivian and Bill Marlar, respectively.

In lieu of flowers, the family suggests donations be made to one of Beryl Neff’s favorite charities: Northwest Lifeline—that supplies food banks throughout the Puget Sound.