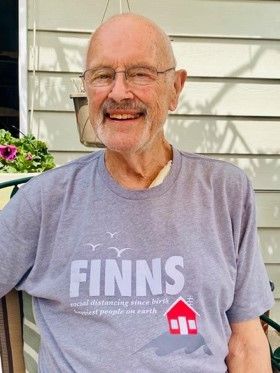 George, husband of Judi Miller, died at the age of 86, following several years of kidney and heart failure. He was a native of Seattle, born to Gertrude and George Miller, and lived in the Seattle area.

George was a 1st LT. in the USAF and was stationed at the Boron Air Force Station in Boron, California, serving as a Flight Controller and Aircraft Warning Squadron for three years.

George attended Roosevelt High School, the University of Washington, and was a member of Pi Kappa Alpha fraternity and a member of Wesley Club. He graduated with a degree in Food Technology and went on to do graduate work at George Washington University. After graduation, George began working as a Regulatory Analytical Chemist with the Food and Drug Administration in Seattle. His focus was on food protection, investigating pesticides and contaminates in foods. During his time at FDA, George was part of the investigation of contaminated Cranberries in 1959, and the use of pesticides on the crops grown in in WA and OR; he investigated Ethanol in Salmon; PCB’s in poultry; helped develop the Salk Vaccine for polio. He investigated “tainted” Tylenol, resulting in the improved and safer packaging of foods and drugs. George was also an Equal Employment Opportunity Counselor with the Department of Health and Human Services, and a member of the Association of Analytical Chemists.

After retirement, George accepted mission trips with the FAO-U.N., the Control Admin. Infrastructure AID, AID Internal Development and EPA. He was a Professor at the University of Gadjah Mada Pesticide Workshop, and with AMIR. His trips included the Philippines; Nairobi, Kenya; Costa Rica, Trinidad and Tobago; Yogyakarta, Indonesia; Colombo, Sri Lanka and Amman and Aquaba, Jordan; teaching and evaluating laboratories on the pesticide control standards and food processing so the developing countries can export their foods. George authored books, Manuals of Food Quality Control, with the FAO-UN in Rome. They were written in English, Spanish and French.

George joined Cub Scouts at age 8 and he was a member of Boy Scouts till his death. He was a Sea Scout and spent his summers at Camp Parsons as a child and an adult. He served in all leadership positions and as Scoutmaster of Troop 430. He was active in the district and nationally. He received Scouting’s Award of Merit and the Silver Beaver award. George combined his Scouting and his church and became a member of the National Lutheran Association of Scouters, where he was President, and Awards Chairman, and received the Lamb Award from the Lutheran Church.

George loved being with people and meeting new people, and would initiate a conversation in a second; he loved learning about others and their experiences in life.

George also loved the outdoors, hiking, climbing camping and skiing with his family throughout the Northwest and Alaska. He was a member of the PTA at the Medina Elementary School; was a soccer coach and was in Toastmasters.

George was a member of St. Andrews Lutheran Church in Bellevue, WA., was on the Outreach Committee, assisted in food collection and represented St. Andrews on the committee serving the Congregations for the Homeless. George’s faith was strong and he was eager to share it with others, participating in the Men’s Bible Study, active in the fellowship hours, served coffee, was a greeter, usher.

George was an avid gardener, growing flowers and berries, and working and pruning in the yard. When his travel ended, George took up Genealogy. He was always looking for the missing persons in our families. He has researched back to the 1400’s. George was a Board Member and volunteer at the Swedish -Finn Historical Society and member of the Swedish Club. He was a volunteer with the Bellevue Police Department, enforcing Handicap Parking. George was also a whiz at Sudoko, word games and card games.

George loved his family, and he is survived by his 3 children Cameon and Tom Jefferson, Gala and David Zilavy and Todd Miller: two step-sons Scott Eagan and Nikki and Sean Eagan and Michelle, 7 grandchildren and 2 great-grandchildren. As George’s wife of 32 years, I will miss my “dear friend” who encouraged me to travel with him on his journeys. Now he is on his most important journey, and I will follow him once again.

George will be interned at Tahoma National Cemetery on Sept, 21, 2020. Memorial services are pending.

George was a great guy and a pleasure to work with.

George gave to others and taught others by who he was. He never asked of others but gave to them freely.
A role model and a warm example of living his faith, freely and with a smile and an open heart.
Thank you George!

George was always a delight to be around at church and at dinners for the homeless men. An easy going gentleman at all times and his love of the Lord shone brightly.