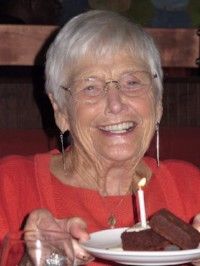 She was preceded in death by her husband, Ed von Wolffersdorff and son Jerry Schutten.

Born and raised in Southern California, she moved to Mercer Island with Ed in 1966. She loved the outdoors especially the northwest and its wonderful hiking. She was a member of the Seattle Mountaineers and was on one of their first hiking trips in the Austrian Alps in the early 80s. She enjoyed her many walking trips in England and Scotland as well.

One of her special pleasures was developing and maintaining her garden. She was a long time member of the Washington Park Arboretum.

Our deepest sympathy to all of Phyllis's family. She was a beautiful lady inside and out! It was a priviledge to have known her!