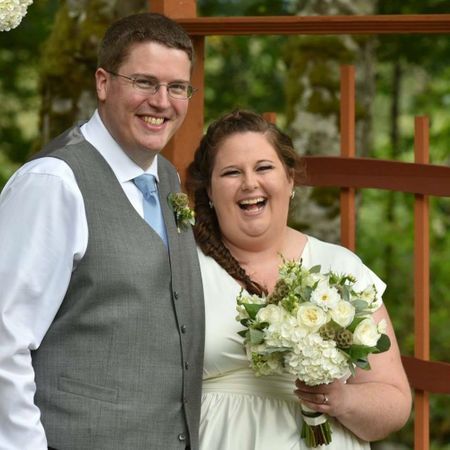 Ian grew up in Westminster, Maryland with his five sisters and brother. He graduated from North Carroll High School in 2004. Ian attained the honor of Eagle Scout and found much joy and friendship from the Boy Scouts. He was a proud geek and child-at-heart who loved computer games, LEGOS, spaceships, trains, dinosaurs and always having the latest and greatest technology.

Ian graduated with a Computer Science Degree from the College of Engineering and Virginia Tech in 2008. After a brief stint at Microsoft in New York, Ian moved to Seattle in 2011 where he continued to work for Microsoft as a Software Developer before moving on to MCG health. In Seattle he met his wife, Kristin. Ian and Kristin made a wonderful life together in Seattle with their corgis, Bagel and Donut, who were like their children. They lost their corgi-mix Bodhi in 2019. After living in Kirkland and Issaquah, Kristin and Ian bought a house and settled in the South Park neighborhood of Seattle, where they had many wonderful friends and neighbors.

Together they loved to travel and everything Disney. They spent a lot of time traveling all over the world, visiting friends and family, and checking new destinations off their travel bucket list. They had recently taken a wonderful trip to Maui where they enjoyed snorkeling with sea turtles and relaxing at the beach. They were Disneyland Annual Pass-holders and had hoped to visit all of the Disney Parks together. Ian loved all foods shaped like Mickey Mouse.

Ian loved being with family and friends and was known for his good humor, his keen intellect, his kind and gracious heart, wonderful smile and his desire to bring joy to those around him.  Ian loved to BBQ and deep-fry in his backyard with friends in Seattle, going to Drag Queen Bingo at the Senior Center, weekend trips to Portland, Leavenworth, Bainbridge Island or Vancouver, and getting drunk and watching the Mariners lose. Ian and Kristin spent a lot of time at corgi birthday parties and dog parks where Ian was always a favorite amongst both the corgis and their parents. When at home Ian and Kristin loved to play board-games, do puzzles and re-watch 30 Rock, Arrested Development and Marvel movies for the hundredth time.

Ian loved to go skiing with his friends at Stevens Pass and Crystal Mountain, yearly camping trips around Washington and trying to drag Kristin out to go hiking. When he had free time you could find Ian playing Roller Coaster Tycoon, gardening, cooking, cuddling with the dogs and watching the airplanes that passed over their house every day to and from SeaTac airport. Ian enjoyed going to lunch with his co-workers and Happy Hours with friends. Ian was a huge fan of Virginia Tech football and watched the Hokies every season.

Ian was preceded in death by his younger brother, Benjamin. In addition to his wife and parents, Ian is survived by his siblings, Rebekah and Joshua Weikers, Abigail, Jacob, Katherine, Dorothy, and Caroline MacLean-Blevins, and his nieces Ariana and Addison Weikers.  Additionally, he is survived by his parents-in-law David and Jodie Crane, and sister-in-law Kylee Crane.  Ian is also survived by his maternal grandparents, Don and Shirley MacLean, his paternal grandparents, Charles and Evelyn Blevins, and his aunts and uncles, Pam MacLean, Doug MacLean and Dale Cantone, and Kevin and Maggie Blevins.

Memorials services will be held in Seattle and in his hometown of Westminster once it is safe to gather.  Notice for these memorial services will be shared when a time and place has been determined.

Memorial contributions can be directed in Ian’s memory to: