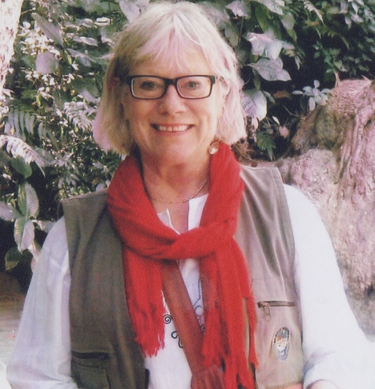 Sue Partridge, 72, passed away August 1, 2021 surrounded by family at her home in Seattle after a long battle with breast cancer. Born in Salt Lake City, Utah on August 28, 1948 and raised in New Mexico, Sue and her two brothers were brought up by their parents Ray and Cate Partridge to appreciate nature and the outdoors, spending summers at the family farms in Utah and Idaho. Sue excelled in school, graduating from Los Alamos High School in New Mexico, and early on showed artistic talent and an adventurous spirit. This led to a year spent in France during college, studying art and the French language. Following graduation with her BA from Brigham Young University in 1970, Sue lived briefly in Montreal, then returned to Los Alamos. There she met and eventually married Montgomery (Monty) Slatkin, PhD, a biology professor at the University of Chicago. Over time, they lived in Chicago, England, and Japan and then moved to Seattle in 1977 when Monty accepted a faculty position at the University of Washington, where Sue ultimately enrolled to study architecture, earning a Master's degree in 1981. Sue thrived in Seattle, and went on to establish an architectural legacy through her work as Director of Architecture and Engineering for the City of Seattle, overseeing numerous projects, which included the design and construction of the new main library, and redesign of fire stations across the city, a project she particularly enjoyed—seeking ideas and advice from the fire fighters themselves.

Sue loved her active life in Seattle, making many friends and taking advantage of all the cultural opportunities offered--music, theater, and particularly the opera, which she attended with her group of "opera ladies". She supported multiple non-profit organizations and worthy causes and helped to make the city a better place. She enjoyed gardening, bicycling (completing the Seattle to Portland STP Classic ride several times), skiing, getting together with friends, and spending time with her pets, most recently kitties Carmen and Micaela. When not working, though, her greatest passion was travel. Sue had a thirst to see the world and she visited countries on every continent, sometimes alone and sometimes with friends. She hiked and explored, climbing around Mts. Fuji and Kilimanjaro and trekking in Nepal. She cruised to Antarctica and climbed Machu Picchu. In 1996 she spent a year on sabbatical from her job with the City to study architecture in Rome, Italy. Even in in later years, fighting lingering breast cancer, she could not be deterred from making trips to Viet Nam and Turkey or to visit her brothers and their families in New Mexico and Nova Scotia, Canada.

She will be warmly remembered for her spunky rebellious nature, intellect, sarcastic wit, artistic flair, signature red pedicure, and true Seattleite's dedication to recycling and composting.

She was lovingly supported in her final weeks by her many close friends and family members, near and far. She is survived by brothers Bruce (Mary) and Edward (Sandy) Partridge and their families, including nieces and nephews Savannah, Austin, Guthrie, Syd, Catherine and Margaret, five grand-nieces and nephews, and ex-husband Monty Slatkin (married 1973 to 1983). Sue's life and legacy will be celebrated by family and friends at a gathering to be scheduled at a later date. Those who wish to pay tribute to her life are invited to donate to causes she herself supported, such as Seattle Arts & Lectures (lectures.org) and ArtsFund (artsfund.org).