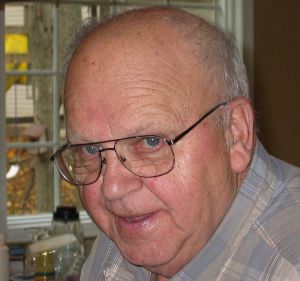 Albert (Al) Burke of Port Orchard, WA passed away peacefully on Monday morning, July 22, 2019 at the age of 90.  Al, known to his friends as “Big Al”, was born in Everett, WA on April 8, 1929 to Vernon Adell and Iola Virginia (Lindblom) Burke.  He and his older brother, Roger, were avid fisherman from an early age.  The two shared a life long passion for fishing and hunting and did so extensively in Washington State and Alaska.  Al was a first mate for Foss Tug in Everett after high school and later joined his brother in Alaska where they worked on the construction of the pulp mill near Ketchikan.  In 1951, Al joined the US Army and went to Korea and fought honorably in the 1st Calvary.  After returning home in 1953, Al obtained a business degree from Kinman Business College.  In 1964, he met and married Lois Jean Bear originally of Spokane, WA and was blessed with two children, Albert and Scott.  Al and Lois resided in Seattle, WA between the years of 1964 and 1997.  In their retirement years, they moved to Grants Pass, OR where they lived for 15 years before returning to Centralia, WA in 2013.  Al moved to Retsil Veterans Home in 2017.  Al is remembered for his extreme kindness and generosity to others and for being a good friend to many.  His kind disposition and great sense of humor will be greatly missed by all who knew him.  He is survived by his wife Lois Burke now residing in Raleigh, NC , son Albert Burke of Wake Forest, NC, son Scott Burke of Newport, WA, and daughter, Lisa Knight of Spokane, WA, daughters-in-law Kimberly Burke and Stacy Burke, grandchildren Margarett Burke, Micah, Burke, Isaac Burke, Christian Burke, Samuel Burke, Gabriel Burke, Jenny Grace Burke, Elijah Burke, Emmaline Burke, Gideon Burke, Carolina Burke, Titus Burke, and Lyndsay Knight.  Al is preceded in death by parents and his brother, Roger Vernon Burke (2010), and daughter-in-law, Elizabeth Anne (Lone) Burke (2009).  Al will be laid to rest in Tahoma National Cemetery for veterans in Kent, WA.