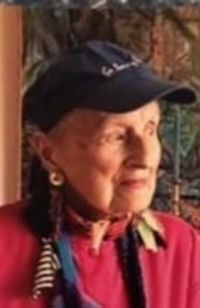 Mabel (“Mabes”) Morrill, née Isebrands, (97) died of congestive heart failure in Seattle, WA on December 11, 2018. She was born on April 30. 1921, in Sibley, Iowa, a small town near the Minnesota border, the youngest of three girls born to Henry and Louise Isebrands.

The Great Depression struck when Mabes was 8 years old, and her mother died when she was 10, but she succeeded in putting herself through the University of Dubuque, where she majored in Speech and Drama.

After serving in the Coast Guard from 1943 to 1945, she joined the Foreign Service, where she met her future husband, Alan Morrill. They were married in 1956, and had one son, Kenneth (“Kam”), in 1961. When they divorced in 1978, after tours in the Dominican Republic, Argentina and Venezuela, Mabes moved to Delaware. During her years in Dover, she gained a reputation as a volunteer yoga instructor, culminating in an appearance on the Today Show at the age of 91. “Mabes’s Babes,” her cadre of yoga students, fondly remember her “happy hours,”  her fashion sense, and her extensive earring collection.

Mabes is survived by her son, Kam, and her niece, Mary Morning of San Diego. At Mabes’s request, her remains were cremated.