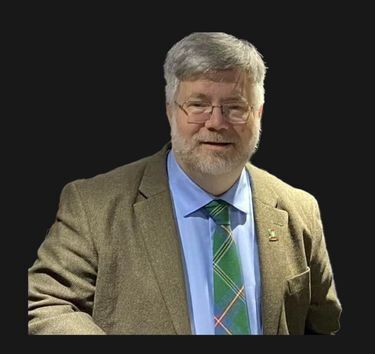 We have lost the true Music Man of our time: Andrew (Andy) D. Robertson passed away on Dec. 27th in his home surrounded by his family, after a courageous fight with cancer. Andy (or “Mr. Ert” to thousands of students) lived to share his love of music with anyone and everyone he could. He created a musical legacy that will live on in the hearts of so many of his students, band families, friends, fellow musicians, and educators.

Andy was born in Columbus Ohio in 1962, the “baby brother” of 3 sisters and a brother. He was blessed by the well-rounded education he received in the Shoreline Public Schools, especially from Mr. Ken Noreen, the band director at Shorecrest High School (“Go Scots!”). Mr. Noreen created the perfect place to love and learn music. And that set the standard for Andy’s life goals—to be a music educator and mentor for multiple generations of “band kids.”

Flashback to 1979/80--Andy and his best friend for life Ward Brannman, put on a production of the Blues Brothers, with Andy as Jake and Ward as Elwood Blues!

After testing the waters teaching in different schools and at different age levels, Andy took on the job that would allow him to define his life at Redmond High School. Starting in 1992 Andy was the Band Director at RHS for 30+years. Andy a/k/a “Mr. Ert” did more than teach band. He, with other professional educators/musicians at RHS, created a music sanctuary in the school.

From 1992 through 2022, Mr. Ert put his soul into everything musical: symphonic band, wind ensemble, jazz ensemble, pep band, musicals, small ensembles, and infamous band trips (Disneyland how many times???).  Andy created anything that would bring the joy of creating music by “his kids.” In addition to the performance groups, Andy taught AP Music Theory and Music History, possessing an encyclopedic knowledge of early/mid 20th Century Jazz.

In the process, Andy shared jokes and puns that would keep his students groaning—the foundation of countless “Ert jokes.” For those of you that were part of that, you know that Andy created one huge musical family—that is the Music Man that he was.

Andy cared about his band family, not the accolades. Regardless, the accolades poured in. Andy’s students and student ensembles won countless awards over the decades. Plus, Andy was honored with many professional awards. Here are just a few: 1997 Redmond Volunteer Arts Award winner; the 2010 Golden Mustang Award; the 2020 Outstanding Music Educator for the Northlake Region of Washington State; and the 2021 Redmond PTSA Outstanding Educator Award.  Andy also received the highest honor for music educators-- the 2020 Hall of Fame Award by the Washington Music Educators Association. All this to say—everyone recognized Andy as our 21st Century Music Man.

And still more - Andy announced track meets for many years. He worked continually on RHS admin/faculty working groups to increase the academic excellence of the entire school. He was deeply involved in the teachers’ union to protect and promote the rights and recognition of educators throughout the school. He helped ensure students were fed on weekends and during summer breaks.

Andy was also a gifted, talented, and excellent musician. He played reeds through college but loved percussion. Andy helped create, conduct, and play percussion in the Washington Wind Symphony. In honor of his father, he always had a Sousa march on the program. He also played jazz drum kit in MOJO and was a member of the percussion section with Seattle Wind Symphony. Andy loved to create music, so he would, at the actual drop of a mallet, jump in and cover for countless community ensembles. He just loved to play music.

Andy loved what he did, he cared deeply for each of his students, and still, as he was dying, wanted to do so much more. He was and is our Music Man. So, to honor Andy, please enjoy the human connection that music brings.  If you can, give money or volunteer time to the RHS music department or to your local public school music program—the effort/dollars you give might just help create the next Music Woman or Music Man for our future generations. Andy’s family thanks all of you who loved him, for your love made his life full.

Andy’s family members extend our heartfelt thanks and appreciation to all those who cared for him, particularly Adam, Joshua, Yan, Jean, infusion/radiologist teams, scores of caring nurses, Michelle, Jessica, and Miriam.

A celebration of Andy’s life and legacy will be held later this spring. Andy’s family and friends will post information on Facebook and share with the musical groups that he loved.

Smile - Andy lived his love wonderfully. Share a joke or a memory of Andy as you listen to a Count Basie album.

Andy was such a treasure to the RHS community and so many more. I will always appreciate the opportunities and joy he brought to our "band kid". He will truly be missed. Praying for his family and band family. I will be honoring him while listening to some marches. Thank you for all you did for so many Andy!