My four-year-old is in the incessant question phase. Every other sentence coming out of his cherubic mouth starts with, “Why…” The other sentences start with, “I want…”

Lather, rinse, repeat for the twelve hours a day he is awake. Not that I’m counting the hours, minutes, seconds until bedtime when I won’t be playing Mommy Encyclopedia anymore.

The other day he saw a photo in the garage of our old Labrador, Jackson. Jackson was my husband’s best friend when we met. Jackson was an awesome dog, the kind of dog that inspired our friends to get dogs. The pick-up line that got us together was, “You wanna come over? I have to feed my dog.” I may have fallen for Jackson before I fell in love with my husband depending on whose version of the story you remember.

When Jackson was about eleven, he stopped eating, he starting peeing in the house. We took him to the vet and an x-ray showed a huge tumor sitting on top of his bladder. Surgery gave us six more good months with him. He declined quickly and we put him to sleep with the help of a vet who met us in a field near our house so he could die lying in the grass in the sun.

When Kiddo saw Jackson’s picture, “What is that dog? That’s not Alice!” Alice is our current six-year-old Lab/ Aussie Shepherd mix.

“That’s the dog we had before Alice. He died before you were born.”

“He got very sick and his body couldn’t live anymore.”

“Me neither, buddy. But someday Alice will die, not for a few more years hopefully, but doggies don’t live as long as people.”

“Why do doggies die?”

“I want a doggie that doesn’t die.”

“That would be nice, but that isn’t how the world works. We get to spend our time here and then we die and make room for more life to come in. It’s like your balloon. When you get it, it’s big and round and fun. Then it loses its air, gets a bit wrinkly, and can’t stay up anymore. One day you know that it’s done.”

“When Alice dies, she goes in the recycling?”

This is not the first time nor will it be the last time we will have a conversation about death. As he starts to actually understand and grasp things, the repetitive questions might become less frequent. But there will always be questions. I will do my best to answer them. 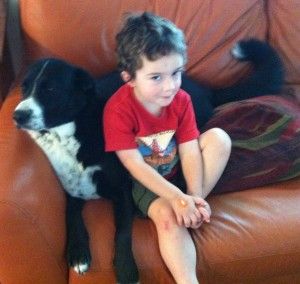 Kiddo and his buddy, Alice