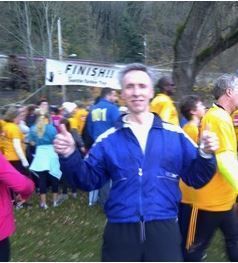 William Martin "Marty" McCabe died in early May at his home in Seattle, WA, of heart disease. He was born in Lily, PA, in 1948, grew up in Chester, PA, attending Chester High School, graduating in the class of 1966, and attended college in Philadelphia at Drexel University, where he achieved a bachelor's, ('71) master of science ('73), and PhD ('79) in engineering.

His college co-op placements with the bridge division of the Philadelphia Department of Streets and the Redevelopment Authority set him on the road to civil engineering. He had a long and satisfying career in geotechnical engineering that involved projects from bridges to airports, from nuclear waste facilities to the Laser Interferometer Gravitational Observatory.

A long-time soccer player and runner, McCabe loved the outdoors. He enjoyed canoeing and fishing, even the time he and his companions failed to note a "portage" sign and went over a waterfall.  He was an avid backpacker, although he could be persnickety about his campsites, driving his trip mates insane. His ski trips with old friends, often to Europe, were sources of great memories for him, especially the one that involved being airlifted off an Alp after taking a hard fall, only to go paragliding the next day.

Marty was known for his sense of humor, including creating elaborate treasure hunts for his sister's son and daughter to solve before they could get their Christmas presents. His Halloween costumes were legendary, including roadkill and RoboElvis.

He played the piano his entire life, and in later years took up oil painting.

His commitment to community service started early, as president of the Chester High Student Council. He went on to become president of the Drexel Interfraternity Council as a member of Tau Kappa Epsilon, coordinated the yearly United Way fund drives in his workplaces in Seattle, and volunteered for a Seattle crisis clinic, among other organizations.

He leaves siblings Michael McCabe, Mary Joyce, and Marilyn McCabe, nieces Amanda Joyce and Emily McCarthy, and nephew Michael Joyce and their families, as well as colleagues and friends across the country, especially his old Chester High School and Drexel friends back in the Philadelphia area.

His laughter, quirky humor, and kindness will be missed, and Marty stories will be told for many years to come.

I met Marty as he was a fraternity brother of my brother Mike. We developed a life long friendship and John and I enjoyed our relationship over these many years! He had some great stories to tell and I can hearing him laughing now. Always loved his Xmas cards because I always anticipated what he would have come up with for Halloween. He had such a creative mind. Our last visit was in 2015. We stayed with him on our way to Alaska coming and going. As always had fun and lots of laughs. We will miss him! Sue Chain Parker

Sympathy to his family and friends. RIP

Marty always had a great story to tell!

Like the time in December, 1975 when he went to help investigate the Ketone chemical dumping that a Virginia company had been doing for nine years. Waste products from the process had routinely been dumped into the James River, in the first national biological disaster - that subsequently shut down the Chesapeake Bay fishing industry for 14 years!

Ketone was a non-biodegradable insecticide that was poisoning the company’s workers, and had contaminated both the region and the watershed.

And Marty was smack in the middle of the hazmat investigation. So, on a rainy December Sunday night, he drove alone back to Philadelphia, where he was a Doctoral candidate at Drexel University.

As he was driving down his street, he noticed police flashing lights on his block. And then he realized that his apartment building was surrounded by cops. They were looking for him!

They made him completely strip naked in the December rain - in front of of his gawking neighbors, so that they could properly contain the ketone on his clothes...

And then there was the time when he placed his briefcase on his car’s roof while he was unlocking it, and forgot about it until he got to the airport...

He retraced his route on foot for weeks looking for the missing briefcase, and finally found it, all destroyed after having been run over countless times on the Penrose Avenue Bridge, and after snow storms having transformed its contents into a soggy pulp.

It’s had contained the only copy of his doctoral thesis, with all of his notes. So he had to start the research all over again...

He had plenty of luck, but sadly most of it was bad... And even still, he always had a self-deprecating story to share that would bring a smile to his friend’s faces.

What blew me away was his mantle-top display of our family’s annual photo Christmas cards, dating back over the decades.

He was a special friend, and he will be missed...

Sorry to hear of Marty’s passing. It was a pleasure to know him.
YITB, Gary Chiusano Drexel TKE AT 880

In the bit of time that I knew Marty, I admired his smarts and accomplishments and enjoyed his humor a lot. He was a unique and special guy. He will be missed.

Marty was a kind, generous, and wonderful colleague. May you rest in peace.

Marty was one of the first people I worked with when I joined D&M (legacy URS/AECOM) in 1989.

As mentioned by others, he had a unique sense of humor.

He really rose to the occasion at Halloween.

But at another Halloween party at about that time he was dressed as --- a lint ball.

You heard that right.

He reported he had visited a number laundromats that day and collected bags of lint.

I believe he than used two-sided tape to stick the lint onto a Tyvek suit.

Every time he moved he dripped lint...

(When asked about the meaning he mentioned something about existentialism).

I also believe it was the same evening he ended up dancing with a lampshade on his head.

With trails of lint on the floor around him.

The next day he was at back at his desk in dress shirt and sport jacket -- being the great engineer and consultant that he was.

With that smirk of a smile when we mentioned the evening before.

You will be missed.

I worked with Marty on numerous projects while at URS. Too many fond memories to list here but I will say, "Marty was a good Joe." Cheers to you for having a full and impactful life.