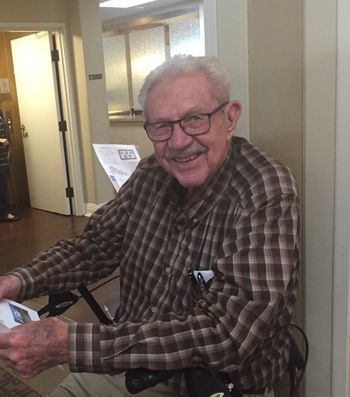 Our beloved father, Gregory Charles “Chuck” McCombs, age 93, passed away on May 4 from natural causes.

Chuck was born January 5, 1928, in Oshkosh, Wisconsin to Richard, an automobile salesman and Marie (Maichen) McCombs, a homemaker who, Chuck always insisted, made the world’s best chocolate cake.  The family moved to Bremerton in the 1940’s where Chuck attended Bremerton High School.  He turned out for football, played the tuba, was elected junior class president and best of all met Patti, the love of his life.

After serving in the Navy, Chuck returned home to Bremerton and began his 38-year career with the US Postal Service, starting as a Christmas helper and working his way up through the ranks.  He hauled heavy Sears catalogs in his mail pouch for miles, made friends with the dogs along his route by keeping treats in his pocket, and was known for the clever nicknames he gave his office pals. He took the advice of a co-worker and joined the Army Reserves and stayed for 30 years, retiring with the rank of Command Sergeant Major. Though he referred to it as “playing soldier”, his pride in serving his country was evident, as was knowing the extra income helped provide for his family. He also took on part time work as a bar tender whenever he could, which funded family vacations every summer.

All through his life, Chuck made friends wherever he went. As one grandson said, “Papa knows everybody”. He made it a point to thank servers, clerks, and other workers, leading by example with a kind word and his sincere appreciation for their efforts.  He loved salmon fishing, playing cribbage and bridge, Seahawk’s football, keeping a tidy yard, and sending greeting cards to his family, often using vintage stamps from his collection.  He and Patti shared time between their beautiful Rocky Point home and the family cabin on Haven Lake near Belfair.   Chuck called both places “paradise” and would often pause and point out the wonders of nature:  the eagle’s nest in the big tree on the point, a blue heron standing at the water’s edge, the clouds reflecting on the lake on a windless day. Watching him glide around a dance floor with Patti in his arms was the definition of poetry in motion.  He could hardly wait for dinner each night, especially if steak was on the menu, and seeing his family gathered around the table was the highlight of any holiday.

A recent family survey revealed many fond memories and unique sayings that belonged to Papa Chuck alone. He loved many kinds of music, from Patsy Cline’s “Crazy” to the Big Bopper’s “Chantilly Lace” which included a lively song and dance routine he taught to his granddaughters.  He called all his sons “Junior” and the grandkids and nieces and nephews were “Pork Chop”.   When he asked if you “wanted a lesson”, that was code for playing a hand of Cribbage, after he made sure it was “for money, or funzees”.  Kids fresh from the bathtub or adults dressed up for an event, even brides and grooms, were told they looked all “slicky dooed”.  When Patti would dream up a home improvement project, he would call her Stanley, as in “here’s another fine mess you’ve got me into.” If something or someone was particularly noteworthy, from new clothes to power tools or a rhododendron in bloom, he would declare “that’s precious and darling”, which was the highest compliment of all.

Chuck always ended his conversations and letters with an enthusiastic “Have a nice day!” and you could sense the love in his voice across the phone lines or written in a card.  Family was everything to Chuck and he and Patti rejoiced in the happiness that their sons and grandchildren brought to their later years and deeply cherished their times with each family.   During busy family gatherings, Chuck would pause and say, “You know, I could have raised ducks.  I would have had three nice dinners and a soft pillow for my head!”, all the while beaming with joy and quite certain that he’d ended up with the better deal.  When asked once what his favorite sound was, he responded that it was his 3 little boys shouting, "Dad's home!”  He loved Steve, Don and John that much.

If there is a defining phrase that sums up Papa Chuck’s philosophy of life, it’s the one  we all know by heart and use often:  “It’s a treat, not a treatment!” Chuck said it in response to just about any situation – no room for dessert, too sleepy to stay up any later, salmon limit reached, last game of cribbage for the night. All bets were off if the dessert in question was Patti’s homemade peach ice cream, though. It was his favorite treat.

Chuck McCombs is survived by his three sons and their families: Stephen Richard (Joyce Foss), grandson David (Tawnia Butorac) and great-grandson, Trek Charles McCombs, of Delta Junction, Alaska;  John David (Terri Quinlan) of Ninilchik, Alaska; Maureen McCombs Todd (Garrett) and great-grandchildren Evelyn and Evan Todd of Soldotna, Alaska; Leslie Wilson (Grey) and great-granddaughter Lennon Wilson, of Ninilchik;  Donald Gregory (Sidney Rockwell) and grandsons Brett Rockwell and Daniel McCombs of Seattle, Washington. It’s worth noting that Chuck insisted he and Patti did not have any daughters-in-law, only daughters.  He is fondly remembered by many nieces, nephews and dear friends in Bremerton, Seattle, Arizona and Alaska.  His last few years were spent among the residents and devoted staff at Fairwinds Brighton Court in Lynwood. He loved to join the singalongs, play cards, listen to live music and cheer for the Seahawks with his Brighton Court neighbors. The family deeply appreciates the kindness and quality care he received.

At Chuck’s request, there will be no funeral. Instead, his family suggests doing a random act of kindness, or sharing a funny story or joke in his memory while remembering his uninhibited laugh and his precious and darling smile.

Arrangements by Co-Op Funeral Home of People’s Memorial and private interment will be at Forest Lawn Cemetery in Bremerton.

Marrying into this family allowed me the privilege and fun of getting to know Uncle Chuck. The last event that we shared was a post-wedding reception for our newly married son and daughter-in-law. As I tried, with my small voice, to get the attention of the folks to make announcements, Chuck used his big, resounding voice to help me out! He was always so warm and loving to me.

Philip and I also enjoyed attending a special Christmas program with Chuck at Brighton Court, which we thoroughly enjoyed. And more recently, as his daughter Joyce shared with me the story of being deemed a daughter, not a daughter-in-law by Chuck, my father-in-law and I have officially adopted that status. I now call him "Dad" and he is delighted.

A life well lived and an uncle well loved, indeed. We will miss him but we know that memories of Chuck and Patti will bring peace and joy.

Pam and Steve, kids and grands