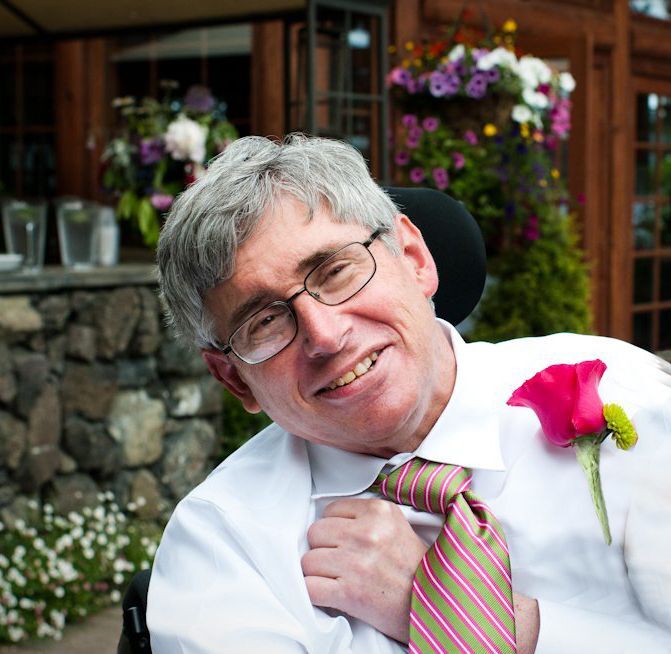 Evan Bernard Smith, whose resilience and upbeat view of life guided him for decades through the challenges of multiple sclerosis, died November 18, 2022. He was 77.

The son of Bernard and Esther (Davies) Smith, Evan was born in 1945 in Seattle. His maternal grandfather, Thomas Davies, an immigrant from Wales, was a pioneering figure in Snohomish County and a special influence on Evan, who came to share his grandfather’s gentle nature and his community-minded spirit.

A graduate of Marysville High School in 1963, and Whitman College in 1967, Evan majored in history and was a Northwest Conference All Star in cross country and track multiple times. He was co-captain of Whitman’s cross country team that finished third in the 1966 NAIA National Cross Country Championships, and individually finished sixth in the steeplechase in the 1967 NAIA National Track Championships. Evan still holds two Whitman records – for the two-mile run and distance medley relay. He was known for his commitment to Whitman Athletics and wrote a sports column for The Pioneer, then the college newspaper. The opening line of his column was always “How’s every little thing?” – a phrase he’d continue to say for the rest of his life with a gleam in his eye when inquiring how others were doing.

After graduation, Evan co-founded the Snohomish Track Club in 1968 and would continue to run in the Pacific Northwest, Alaska, and the 1968 Olympic Trials. He stayed involved in the sport his whole life, coaching track for decades at the collegiate and high school levels, even after his illness robbed him of his ability to run. His passion for the sport never waned; during his final years, the TV was always tuned to track events such as in the Olympics or the World Athletics Championships.

Evan trained with the legendary Steve Prefontaine at the University of Oregon while earning a master’s degree in communications (and would later lament the Ducks’ devolution from a running school to a football school).

More than a decade later, he earned a law degree from Case Western Reserve University. As a professor at Kent State University, Ohio Wesleyan University, Southern Illinois University, and University of Alaska - Fairbanks, Evan taught journalism, history, and law during the 1970s, ’80s, and ’90s.

At the end of 1990, he returned to the Northwest with his family. Although MS increasingly limited his mobility, he remained committed to writing, coaching, and leading in the community. He was active in his church and his childrens’ school district, coaching high school and middle school track from his wheelchair. Evan wrote news and opinion columns for local news outlets – he co-founded the Shoreline Week which eventually became part of the Everett Herald-owned Enterprise newspapers, where he was Forum Editor. Later, he helped start the Shoreline Area News online publication, where he wrote about local politics.

In 1998, at his daughter’s nomination, Evan was named Father of the Year by the National MS Society’s Greater Washington Chapter, where he volunteered his time to mentor those newly diagnosed with the disease. Evan never let his illness define him: he was optimistic, upbeat, and full of self-described “vim and vigor.” When asked how he was doing, he always answered “Well, except for a little case of MS, I’m just fine!”

Evan is survived by his wife of 41 years, Barbara Schechter, daughter Ellen Gardner (Adam), son Jared, grandson Wyatt, granddaughter Emma, and countless other family members, friends, and caregivers who fell in love with his wonderful (albeit interminable) stories and bad puns. He imparted to his children his passion for history and sports and his attention to current political events. Those who spent time with him will remember his friendly nature, sense of humor, intellect and, most of all, his courage and determination to live a full life in the face of a cruel, incurable disease. Those qualities and his memory will forever inspire all who were lucky enough to know him.

A memorial service will be held at 2 p.m. on Saturday, January 28th, at Richmond Beach Congregational Church. Those who knew and loved Evan are invited to come and share stories – he loved nothing more than telling and listening to good ones. In lieu of flowers, please contribute to the Evan Smith Fund for Cross Country and Track at Whitman College at give.whitman.edu/smith, which will support the program that meant so much to him and his lifelong teammates. Others might consider subscribing to their local newspaper and reading it regularly in Evan’s honor.

We are High School classmates of Evan.
We plan to come to the memorial service
in January. We may even tell of some memories of our time spent with Evan.
Bob and Jan (Weber) Rollins

It was so good to see Evan at our class reunion s. He was a very a very special person.

Evan is my best friend since 9/63–I look forward to the celebration of his special life.

Evan was special in so many ways. The earth was better because he was here.

Table 3 sends love and prayers to Table 2. I'm guessing Table 1 is now a riot of laughter, snorts, bad puns, and terrible jokes from the best of the best who have left us for a higher ground and greener grass. We will miss Evan terribly ~