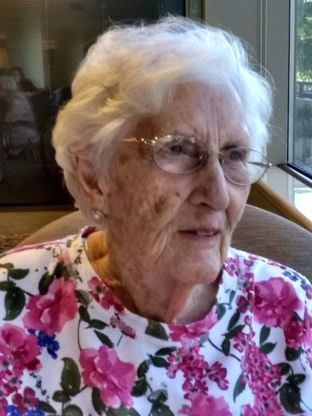 Jo Frankfourth, long-time resident of Anchorage and Eagle River, and Pioneer of Alaska, passed away on August 11th in Seattle, Washington. Although baptized Ruby Josephine, she always said, "Just call me Jo."

She was a 1947 graduate of Anchorage High School, where she lettered in women's basketball.  Jo married her high school sweetheart, Jack Frankfourth, in 1949 in Anchorage.  They would have celebrated their 72nd wedding anniversary on August 19th.

Born October 4, 1929 in Longmont, Colorado, to Viola Verlee Lucas and John Fred Calloway, she lived much of her early childhood with her grandmother, Susie Jane Lucas and her beloved aunt, Vivian Lucas. During early WWII, she lived with her mother Viola (Vi) and stepfather Elmo (Pat) Aultman in Leadville, Colorado, where he worked in the molybdenum mine. In the early 1940s the young family moved to Anchorage, and Pat worked for the U.S. Army Corps of Engineers on the construction of the Alaska-Canadian Highway.

A devoted mother, Jo was committed to providing expansive opportunity to her young daughters, Dee and Vicky, born in the Territory of Alaska. Whether taking them to the new ZJ Loussac Library on F Street for piles of books; introducing them to tap, ballet, swimming, or piano lessons; or buying a horse that she named Tammy (after her favorite song of the time) so they could learn to ride, she was all about experiential education. On drives between Eagle River and Anchorage she would encourage the counting of moose along the highway (56 was tops) or the belting out of show tunes and WWII songs at the top of their lungs. She hand-dug a water well with Jack in Eagle River, and took a lead in “Operation Chugiak High School” to ensure a third Anchorage high school close to home—all before the 1964 Earthquake.

Jo loved being with others and sometimes her energy seemed inexhaustible! She was enthusiastically involved in the growing Eagle River community of the 1950s and 60s--from crafting posters for the annual Chugiak PTA fundraising carnivals to contributing as an essential cast member in the many theatrical productions of the Chugiak Players. Her love of the stage continued into her last years. She took great pleasure in activities of all kinds—from bowling, golf, softball, and 10-K runs to Scrabble, Pinochle, and Bridge.

Jo was a civil engineering draftsperson for most of her professional life.  Her first jobs were with the Alaska Road Commission and Air Photo Tech.  Later, she was employed by Dickinson-Oswald Engineers (now DOWL) in Anchorage, and taught many co-workers her drafting skills. She was a meticulous and deft artist, known for her remarkable hand drafting, lettering, and Leroy skills. Jo’s experience and expertise led her to create the new Drafting Technology Program at the University of Alaska, Anchorage and she became its first Coordinator and Lead Instructor. She wrote her own student drafting technology textbook and taught at UAA from 1971 to 1984. Her skills came in handy during legislation of the Alaska Lands Bill when she worked with the Alaska Coalition to craft some of the original HR 39 maps for the U.S. Congress.

She completed two years of college at Colorado Teachers College (now University of Northern Colorado) in the 1940s, and passionately resumed coursework during sabbatical from UAA at The Evergreen State College in Olympia. She was awarded her Bachelor of Arts degree in 1979, at the age of 50. As an adult, she attended Northwest Outward Bound School, rafted the Colorado River through the Grand Canyon, and attempted to bring a standalone Outward Bound School to Alaska.

Jo and Jack spent some of their happiest years after retirement in Hawai’i on the island of Kaua’i, where they spent the winter months in Kapa'a—returning to their beloved Alaska in the summers.

Through her years with the Girl Scouts and Camp Togowoods near Wasilla, Jo became an avid hiker and lover of the outdoors. She housed any and all acquaintances who wanted to explore Alaska’s wildness. Her favorite adventures took her to Aialik Bay, Shishmaref, Serpentine Hot Springs, Camp Denali, Kachemak Bay, and her backyard Mt. Baldy. Stepdad Pat’s super cub airplane (N1912A) took her to some of the best spots in Southcentral Alaska.

You are warmly invited to share your memories of Jo in the comments below.  Thank you for your love and friendship with her and for remembering her fondly.

I had no idea how many wonderful things my beloved cousin accomplished in her life. I know that she loved me in a very special way & that’s all that mattered. She (& Jack) had a way of being my angels in the shadows at times when I didn’t think there were any answers. Rest In Peace my dear cousin.

I taught at Anchorage Community College along with Jo, and she befriended me, even though I was 25-30 years younger. She took me to the Upper Russian Lake cabin, and I love it. She was a wonderful teacher and human being.

Jo ,being my cousin’s wife was someone I wish I could have met. We kept In touch through the mail and I always felt connected to this lady. My Cousin Jack is very fortunate to have loved this lady. She loved Jack…Loved her girls and very caring always. Helped me regarding genealogy Info…this is just through mails. We didn’t ‘ keep in touch later years, but I never forgot her. Jack…you are so fortunate to have lived with her. What An inspiration. It is very hard to lose a loved one…who gave a tremendous comfort to so many. Sorry….no one in your family kept In touch with me, but I will not forget “Jo”. Your cousin, Beverly