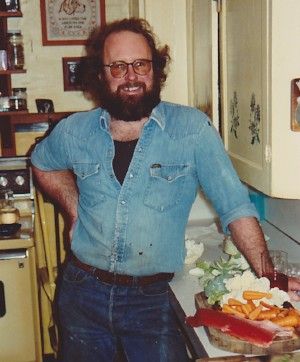 Mark W. Kemp, born January 18, 1951 in Wenatchee, WA to Warren and Uta Mae (Yarbrough) Kemp, died December 2, 2017 at UWMC.  He grew up and attended school in Quincy, WA until 1967 when the family moved to Everett, WA. Mark graduated from Cascade High School in 1969 and attended the UW where his wide-ranging interests began to flower.

While a student, Mark took and passed the test to qualify as a journeyman carpenter. This led to lifetime membership in the International Brotherhood of Carpenters and employment on the Grand Coulee, Chief Joseph, and Wanapum dams.  In 1976 Mark studied Spanish literature at the Institute de Allende in San Miguel; in 1977 married his wife of almost 40 years, Nicolette Roberge; in 1978 relocated to Oso, and in 1988 added daughter, Katrina, to the family.

Mark’s happiest hours were spent at the Kemp Farm. He was constantly busy with his dogs and cats, pigs, cattle, poultry, garden, trees, and fields. Home activities were never “chores”. He grew 22 varieties of garlic and old world fruit trees. Gardening, animal care, haying, making sausage, woodcutting, fishing for steelhead out his back door, driving in the hills, reading widely, and listening to music – all lifted his heart and soul and helped to ease his considerable physical pain.

Mark was adventurous physically as well as intellectually. While his health held, he enjoyed fishing in lakes, rivers, Puget Sound, the Pacific Ocean, and the Northwest Territories, and he hunted deer and elk successfully. He and Nicolette hiked, climbed, and rode horseback in the North Cascades. They went hot air ballooning in Snohomish, spelunking in the North California and Oregon lava tubes and attending the Ashland Festival. Along with 8 year-old Katrina, they hiked over the Cascades from Stehekin to Marblemount. In 1994 while he recovered from his first significant injury, the family visited ancestral homelands in Denmark and France and also spent time in Austria, Italy, and Spain visiting friends. One day in France they went from the summit of Montsegur to the deep underground in the caves in Ariege.

Mark was a superintendent for BNB construction building medical labs throughout the Seattle area. When his pain was no longer controllable, he retired from active employment to his farm where he could work and rest according to his body’s dictate. He and Nicolette continued to enjoy music festivals, especially Wintergrass and the Wenatchee River Bluegrass Festival.

Mark was predeceased by his father, Warren, brother, Clifford, and several excellent dogs including Spudmutt, Kennebec, Sprat, and Haggis as well as friends Jackie Nordstrom, John Glansbeek, and Al Osmonson.

He is survived by his beloved wife, Nicolette Roberge; his daughter and son-in-law, Katrina and Alan Akioka; his mother, Uta Mae Kemp, and sisters Lola Helen and Peggy Janell Kemp as well as many friends including Jim Nicklos, Gary and Zeb Wiggin, Brian Taylor, Ted Nordstrom, and Theodore Peterson. He also leaves his dogs Bokbok and Beaucephalis, his special cats Springer Rumpus and Nero.

We wish to thank the SCCA team, led by Dr. Veena Shankaran, the UWMC oncology ICU team, Dr. David Wenger, and Dr. Heidi Rendall for their kind support and care.

Mark was a loving and supportive husband, father, and mentor. He valued autonomy and interdependence, social justice and human dignity, craftsmanship and innovation, physical courage and the life of the mind. He was generous but taciturn, a respected leader but uncomfortable in groups, a Renaissance man but a farmer.

Private Animist ceremonies will be held at a later date.

You should have seen me when I was much younger
I could do almost anything I tried.
All the places I have been,
All the losses and the wins,
Come on, baby, let’s take one more ride.

Nicolette,
This is Cindy, Penney's cousin from Florida, now NC. We met again while I was up for Uncle Ted's birthday in August.

So sorry to hear of Mark's passing. Praying for you at this difficult time.

Dear Sarah and Thomas,
I am so sorry to hear of this. My condolences to you both.

Mark was a very great long time friend. Him and I used to go to MT hunting for quite a few years. He was also a previous boss of mine at DPR Construction and at BNB. You I'll never find a better guy. We used to just laugh and BS going down the road. He was always up for anything. Although I regret I hadn't seen or talked to him much since we have moved away. But I am happy to say we had recently spoke on the phone for quite sometime. He will be missed by all that knew him. Always happy. RIP Mark. Also want to send my thoughts to his wife and his daughter and her family. He will always be in my thoughts.

So sorry to hear of your loss. I’m so glad to have met Mark at our festival, and hope those times gave him some happiness. I’ll see you down the road.