How to Teach Goodbye: A Mother’s Take on Childhood Pet Loss

How to Teach Goodbye: A Mother’s Take on Childhood Pet Loss

“Jeremy, I’m so sorry honey… but he’s gone. They couldn’t save him.”

My eight-year-old son and I sat on our pilly, honey-colored sofa in the morning light of our tiny living room.

Inhaling deeply through my eyes in an attempt not to cry, I handed Jer the red velvet heart sachet he’d sent with Surrey, our cat of nearly seven years, to the animal hospital the night before. Holding the lavender-filled pillow in his lap, he hung his head and sobbed. I kept him home from school that day, tried to talk about the fact that Surrey had been in kidney failure when I brought him into the hospital; that the most compassionate thing we could have done for him was to let him go.

But this was all very abstract to my son who, at eight, was resentful that I’d returned home with an empty cat carrier after promising, “Everything will be okay” only 12 hours before. Where was Surrey now? he wanted to know. What would the animal hospital do with his body? Would there be a gravesite where we could visit him? Why hadn’t I brought the cat home first to say goodbye?

Children often have more questions about death than we have the answers to. Even when we know the answers, finding age-appropriate ways of articulating the truth can be challenging.
As parents and caregivers, we strive to protect our children from unpleasantries and harsh realities best saved for when they’re older, more ready to deal with complex emotions that require processing to overcome. It’s not unusual for those with children in their care to feel ill-equipped to answer honestly; we may find ourselves giving our children the same answers our parents gave us at their age, even when they don’t align with our beliefs.

Jeremy’s questions about Surrey post-mortem made my heart ache for one reason that hangs over my head to this day: though the cat was actively dying, we could have handled Surrey’s death in a way and setting that was more in line with our values as a family. It wasn’t just the cat’s sudden death that troubled my son, it was all the unknown about the process.

I knew that the next time our family had to say goodbye to one of our pets, we’d handle the situation very differently, though I wasn’t sure how just yet.

Sherman was dying. A week into his sudden, unexplained paralysis, it was very clear: he was ready to go.

This just wasn’t fair. Jeremy, now fourteen years old, sat on the soft black leather of a different sofa, in twilight of a different living room, with his three-year-old cat on his lap. Diapered and twitching, Sherman had suffered some kind of unknown trauma and his health was declining rapidly.

Jer stroked his cat with a knowing look on his face. Over the past week, we’d discussed that while our family would do everything we could to keep Sherman living a happy, healthy cat life, the possibility remained that he might take a turn for the worse. The day before, Jeremy and I made the decision together that the most loving act we could give Sherman would be to let him pass on. We decided on in-home euthanasia and to care for Sherman’s remains by burying him in our backyard, the only home Sherm had ever known, under our apple tree.

Jeremy and his two little sisters, Stella (six years old) and Lucy (age four), stayed home from school the day before and the day of Sherman’s euthanasia. Our focus was on spending time together and enjoying some normalcy as we said goodbye to our pet after a long week of caring for him as a paraplegic. Our neighbor Stef, who’d been the one to find Sherman after his injury, stopped by to spend some time with us. 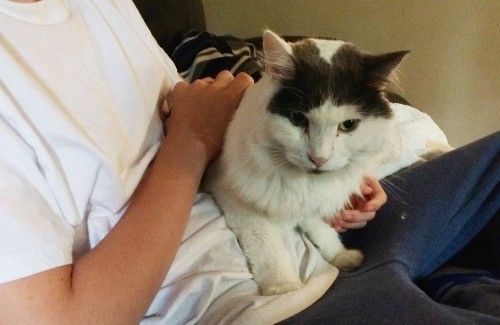 The vet arrived at our home early morning, as scheduled, to perform the procedure. We sat in our living room as he explained the process to us, let us know of some completely normal, yet potentially unsightly occurrences: Sherman may pass away with his eyes still open; he may express some agonal (labored) breathing as he takes his last breaths. Once we were all ready, we headed to the bedroom, where Jeremy gave the vet the nod to go ahead.

I held Lucy on my lap and let the tears roll down my cheeks. Jeremy and Stella wept over Sherman as we saw his beautiful, fluffy body relax for the first time in days. The two older children pet him, kissed him, loved him deeply in his final moments. Time seemed to stop for a few moments as we paused over the finality of what we had just witnessed; Sherman’s tiny ribcage stilled.

When we were ready, the vet made a couple of clay paw prints for us as a keepsake: one for the family, and one especially for Jeremy.

Immediate burial seemed abrupt when our aim was a gentle goodbye, so we laid a couple of blankets on our dining table and rested Sherman there for one last nap in the sunshine. Fresh tears still on her face, Stella announced that she was going outside to pick some flowers and stones for Sherman. Lucy followed, and soon we had an unexpected cat wake. Jeremy and I sat near Sherm most of the day, sipping drinks, sometimes crying, sometimes just lovingly stroking our pet on the last day we’d ever get to. Still so young, Sherman was ridiculously soft, his fur more rabbit-like than cat. We pet our dead cat as I answered the kids’ questions about where Sherman was now; we talked about our family’s beliefs regarding the afterlife. 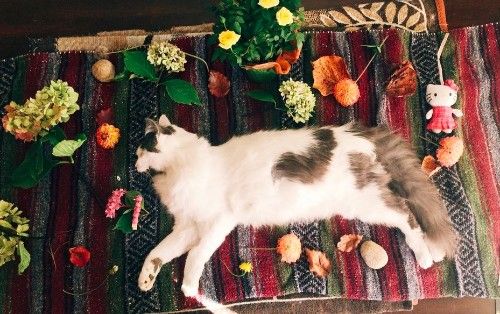 Then something unexpected happened: My grandmother, whom I’d called earlier to let know of the sad news, stopped by with flowers and a card for Jeremy, donuts, cupcakes, and a satin pillowcase fixed with a zipper that Grandma thought might be a nice green burial shroud for Sherman. Shortly after, Stef, came by with flowers from her garden to share. No one acted as if it were the slightest bit strange for us to have our recently deceased cat laid out and adorned in the middle of our home. The kids were able to experience the empathy and support of our extended family and friends during our time of loss.

We had a few faux pas through this experience, particularly from those experiencing their first cat wake: Lucy tried to use her doctor kit on Sherman throughout the day, but we gently explained that just isn’t something we do when someone has passed away. We just let them rest.

All the children wanted to participate in the burial. Ever eager to dig holes in the yard, the two little girls assisted their dad and I in creating a plot. Jeremy hesitated in his wish to carry Sherman down to his final spot, but determined, he helped me place Sherman on a bed of flowers into Grandma’s satin pillowcase, and carried him down to the apple tree. We lowered him into the earth, and I asked if there was anything he wanted to say. There wasn’t. My husband looked at me as if I should know what to say; exhausted, I looked up to the sky, dead cat at my feet and exhaled with gratitude, “Thank you, Sherman.”

Once we’d covered the gravesite with dirt, we collected stones and magnolia branches to mark the now sacred place in our yard. Stella and Lucy played nearby for the rest of the afternoon. They gleefully asked their aunt and cousin later that night if they wanted to see, “Sherman’s spot”. Stella wondered aloud if we could dig him up and look at him again one day. We explained to her that this just isn’t something you do when someone dies. Again, we just let them rest.

Loss of a pet can be a teachable moment for parents and children: uncomfortable, yet very real topics such as loss, grief, death, and the family’s cultural and personal beliefs around the afterlife can be touched on. Allowing children to remain present and participatory in the dying and after care process can be healing for all involved; by allowing our kids to experience the death of a family pet, we allow them to continue to care for their pet. We can hold safe space for the very natural process of grieving, which children do experience. We can express our own grief, connecting with our children on the universal truth that all that lives must pass away, without getting too deep or macabre.

Our family recognizes that with Sherman’s death, we were very fortunate in many ways: we were able to elect in-home euthanasia, which may not have been an option had Sherman been violently injured; we had an appropriate place to lay Sherman’s body to rest in our backyard. Even taking time off of work and school is a luxury many families may not be able to afford when it comes to pet death care. We are grateful that, in this case, we were able to not only give our cat a humane send off, but we were able to plant seeds of death-positive culture to our children.

And by modeling healthy behavior around death and dying to our children, we cultivate the potential for them to pass this ancient human practice on to others.

Ashley Topacio is a mother of three who enjoys writing and drawing. Presently, she is working toward her funeral director's license by serving the kind folks and families of The Co-op Funeral Home of People's Memorial.