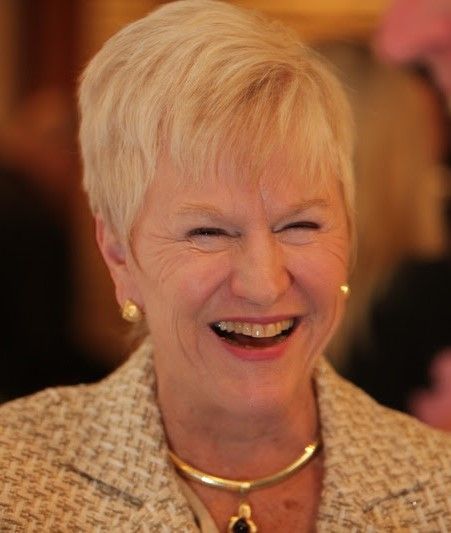 Jane Elizabeth (Darrah) Gates, age 78, passed on peacefully, surrounded by her family, on October 3, 2020. Jane was known for her dry Midwestern one-liners and her ability to make every moment a teaching moment. Her red-headed spirit and quick, constant laugh made Jane the center of every party.

Jane was born on March 6, 1942, in Wichita, Kansas, the second child and first girl of John and Joanne Darrah, after Tom but before Cindy, and twins Jody and Bo. Always a bit naughty, Jane was sent off to boarding school for a bit, graduating in 1960 from Wichita High School. The theatrical Jane took her studies to Kansas University where she graduated in 1964 with a degree both in Education and having fun as a member of the Pi Beta Phi sorority.

After college, Jane headed to California to begin her 20-year career in Elementary Education, teaching and mentoring first, second, and third graders. Fittingly, Jane met Navy man and future attorney (just like her dad), Mike Gates, at a party in Belmont Shores. Jane and Mike were married June 28, 1966, in Wichita, and shared a boisterous, adventurous, loving life together for nearly 55 years. Ever the comedic duo, as newlyweds, Jane and Mike even appeared on TV’s “The Anniversary Game” in 1970. Jane’s stylish bee-hive hairdo, done up for the show and held up by toilet paper, is just one of the many classic Jane stories told over the years.

When Mike finished his time in the Navy, the couple moved to San Francisco where Mike completed law school at Hastings and Jane taught school. Shortly thereafter, Jane and Mike put down roots at the house on Castec Way in the Arden Park neighborhood in Sacramento to begin their family.

Jane was a strict, but loving mother to Kim and brother Adam, born three years later.  During their 30 years raising their family in Sacramento, the kids remember mom as the one in charge of everything, from PTA President, to lots and lots of parties. Always up on the neighborhood gossip, Adam’s friends dubbed Mrs. Gates the “mayor of Arden Park.” But Jane was not only about fun. She instilled in her kids the concept of excessive generosity. Jane’s instinct was to think of others by always being the first to jump in.

After some time off to raise her young children, Jane went back to the classroom at St. Michael’s and then Country Day Elementary Schools in Sacramento. Described as a disciplined, organized, book-loving Mary Poppins, students continued to track down one of their favorite teachers, Mrs. Gates, many years after she retired.

As a second mom to many of Kim and Adam’s friends, Mrs. Gates inspired others to believe in themselves, to follow their dreams, and to simply go for it. She was not afraid to give her opinion and make a helpful, concrete suggestion to a young impressionable mind. One such friend was inspired to become a teacher after Mrs. Gates suggested it.

Jane continued her “teaching” career, however, as Nana to Kim and Ron Thunen’s children, Ella, Charlotte and Maddy and to Adam and Silvia Gates’ children, Zephyr and Colton. Jane’s love of reading, travel, gardening, and cooking was never more evident than in her role as Nana.

Ever the Midwesterner, for the last 18 years, Jane loved her retirement life split between Palm Dessert and summers near Kim’s family and friends on Mercer Island, Washington.

Jane was an organizer, and a consummate do-er, cramming many activities into the day. A full life was a busy life for the Gates family commander. She was a casual, effortless entertainer, making all guests feel welcomed and included. For Jane, life was about celebrations. Some of her best memories were the surprise 25th and 50th wedding anniversary parties, thrown by her children. Nana was a great gift giver and made holidays memorable for all.

A good weekend for Jane started with a strong cup of coffee and a good book followed by a lively evening with family and friends or maybe a meeting of one of her Gourmet Clubs. With a Manhattan in hand, Jane would prepare a delicious and inventive home-cooked meal that would inevitably end with something sweet.

Jane loved events with friends all her life, from endless games of tennis in Sacramento at Arden Park to golf in Palm Desert. In her later years, Jane developed a keen sense for the strategy of a good game of bridge and a passion for playing mahjong with friends, new and old.

Jane and Mike made a point of seeing as much of the world as possible. The newlyweds even spent six months tent camping on $5 a day in Europe in the late 1960s and visited again several times throughout their lifetime together. From China to Turkey to Washington, DC, Jane and Mike’s many trips included an appropriate book for Jane, making lots of new friends, and enjoying a good cocktail at the end of the day of sightseeing. A sharp-witted conversationalist and a positive people person, Jane’s warm smile and engaging personality started many great conversations and attracted lots of new friends throughout the years. Jane Gates was easy to be around.

Though always stylishly conservatively dressed, Jane liked nice things, but wanted them half off. Jane was famously the queen of the frugality and the thrifty bargain. She cruised the garage sales of Sacramento, kept an envelope of coupons, and had a keen eye for a deal.  Jane has proudly passed down this skill to her kids and grandkids.

Jane suffered and died from Multiple System Atrophy. The family asks that donations be made in her name to The End of Life Washington (https://endoflifewa.org/). Due to Covid-19, Jane’s life will be celebrated with a Zoom service and a drive-thru hello to the family on Oct 25. Information about this and lots of wonderful photos can be found at www.janegates.com.

I'm so sorry to hear of Jane's passing. She was one of those legendary Darrah kids who lived one block north of me on Pershing street in Wichita. Like Hibbard and Anita Davis' family was for the College Hill neighborhood, the fun-loving Darrahs were for our neighborhood, one of those families where something was always going on. Even now I can think back remembering those times, and come away from it smiling. Reading her obituary it is clear that along with a number of other outstanding personal traits, she carried the Darrah tradition for living life with gusto into her adult years. Thanks Jane, your life made mine better.

Mike, So sorry to hear of Jane’s passing. Will always remember routing for our sons at the Jesuit football games, dressed in red, of course. Such great memories. May the memories you two shared bring you some comfort during this difficult time.