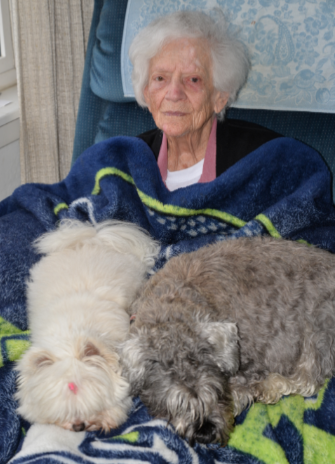 Vi worked her entire life at clerk-type positions, including, after moving to Seattle in 1962, 21 years with Boeing in Quality Assurance at Plant 2.  She worked to live but she lived to have fun. She was willing to try anything, even later in life: horseback riding, repairing boat engines, sailing, fishing, bowling (till age 91), golfing, rockhounding, winemaking, gourmet cooking.  She loved gardening, traveling, and dogs.

Everyone loved her because she was kind, gentle, independent, nonjudgmental, and the best listener ever.  Her motto was live and let live; and she quietly did things her own way. She survived family losses, breast cancer, knee and hip replacements, and the ordinary blows of life by sheer grit, a positive spirit, and a daily glass of wine.  She took a daily walk even at age 99.

Vi is survived by her daughter Pat, sister-in-law June Ziccarelli, niece Lynn Stavrakis, and nephews Michael and Jay Ziccarelli and their families.  No service is planned. Remembrances to the Medic One Foundation or your favorite charity.

So sorry for your loss. I read she was related to June and Jay Ziccarelli? Is this the same June that lived In Bellevue and is now in Milwaukie Oregon living near her daughter? She also has a son named Jay. I have been trying to find June. My mother Dolores Nelson and her are good friends and we lost her info. If you could email me I would be grateful. Thank you, Marla Kessler (Dolores’s Daughter)