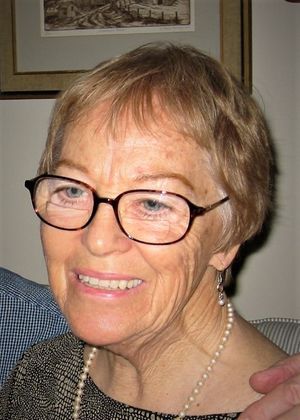 Betty passed away peacefully in her sleep in the early morning of December 18, 2019. Preceded in death by her parents, Kathryn (Keenan) and Chelcie Edwards, and her brother, John Edwards. Born December 5, 1924 in Chicago, Illinois. Survived by her husband of 70 years, Bill and their 6 children, Martha (Steve), John, Liz (Chris), Aimee (Jean-Pierre), Bill (Jennifer) and Maria, 15 grandchildren, Emily, Andy, Chris, Sam, Emma, John, Ann, Marc, Hadrien, Hugh, Helen, Ryan, Henry, William and Jahnavi, and 8 great-grandchildren, Hanna, Yohannes, Eden, Teodros, Garrison, Fritz, Ida, and Trav. Fondly remembered by longtime friend and classmate of Chicago’s St. Casimir Academy, Dorothy O'Connell and husband James (Okie) O’Connell of Sun City Arizona. Betty and Bill attended Catholic University in Washington, D.C. with a vibrant group of fellow students fresh out of wartime who called themselves "The Troops." This included the O’Connells, Gilders, Tresanskys, Keefes, Murphys, Yorks, Elliots, Nissens, Pryzgoskis, Leonard Wnukowski, Ted Borek and many more friends than can be mentioned here. Proud of their University, and loyal and dedicated alums, Betty and Bill led the homecoming committee one year for alumnae in the 1980's.  Throughout their lives, Bill and Betty lived in Seattle, Bainbridge Island, WA, Amelia Island FL, Washington, DC, Waterville, NY, and London, England. They traveled throughout Europe, China and Taiwan. Betty went solo to Russia as Bill worked for the Navy and was not admitted. A certified Montessori teacher, she taught music in a Montessori preschool in Washington, D.C. She began a travel agent career at Go Travel while living on Bainbridge Island and parlayed her American expertise into a similar position at a London travel office while residing there in the mid-1980s. She loved to entertain, participate in her church's Christian Family Movement (CFM) and plumb the depths of all that Washington, DC offered. Neighbors and friends in Chevy Chase included the Maubreys, Kuttners, Klines, Kuhs, Hennesseys, Mayhews, Ringels, Ralstons, Whittingtons, Grimms, Edelhertzs, Bermonts, Hannapels and Hages.

Both Bill and Betty, coming from modest beginnings, remained life-long Democrats. Betty was a longtime member of the League of Women Voters.  She participated in many candidate campaigns and was a steadfast political contributor and always a well-informed voter. She had phenomenal energy, a quick wit, sharp intelligence and loved to read. Perhaps her greatest enjoyment, was her love to dance. Betty reminisced about being launched through African American hot shot dancers’ legs at big band dances in Chicago, and she and Bill danced beautifully in spite of their children’s chagrin to “String of Pearls” into the ’70’s. Stricken by a passion later in life, she leaves behind 30 full binders of genealogical research into both the Potter and Edwards family, compiled from early computer research, and constant trips around the country and Ireland with Bill. Visits to graveyards, small town records offices, archives led to knocking on doors and interviewing second cousins.  Thanks to her persistent sleuthing, both families claim a Mayflower progenitor, and a daughter or son of the American Revolution. Mom, you were one of a kind, and we are grateful for your gifts to us and your loving bond with Dad, and your six children. A memorial mass to remember Betty will take place at 5:30 p.m. on January 27, 2020 at St. James Cathedral in Seattle, WA.