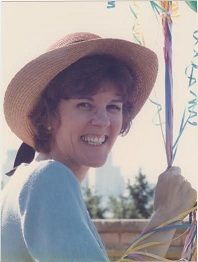 Nancy Colbert died of respiratory failure on May 6, 2015, at her home with her sisters by her side. She was born in Syracuse, New York, on September 25, 1947, to Jean and Don Johnson and grew up in Liverpool, New York.

She graduated from the University of Denver in 1969, and received a Masters in Library Science from the University of Pittsburgh in 1971. After her schooling, she lived in Boston, New York City, Chicago, Memphis, and Los Angeles working for Hingham and Memphis Public Libraries, Holiday Inn, Time Warner, HBO, Western Airlines, and Teleflora.

For the last 26 years she lived in the Queen Anne area of Seattle and worked for Alaska Airlines as a systems analyst, “keeping the dinosaur computers alive”.

Wherever she lived, Nancy built communities and families for herself and others. In the spring of 1994 Nancy began Queen Anne Singles and Friends, a group that brought many people together and continues to flourish today. She started or attended groups such as Jenny’s Book Club, First Thursday, Queen Anne Singles Book Club, Meaningful Movies, and Sunday Assembly.

She was interested in co-housing and always wished to live in an intentional community, which she built for herself around her work and home.

From an early age, Nancy loved to plan parties, direct plays, and create fundraisers. Even in her adulthood she had cupboards and baskets of toys that she shared with a child’s energy and joy.

She was well known for her creative costumes for Halloween and other occasions, from the Millenium Bug to the constellation Orion.

She loved animals, especially cats and dogs, fostered cats and kittens, and was a volunteer with the Seattle Animal Shelter and other area rescues.

She is survived by her sisters, Donna Johnson Reidhead and her husband Jim of Fort Collins, Colorado, and Lisa Anne Johnson and her husband Jerry Schmidt of Dubuque, Iowa, her nephews Chris Reidhead of Fort Collins, and Ben Reidhead and his wife Erin of Cleveland, Ohio, and great nieces Caroline and Annelise. Her special friend Brien Wygle and her many friends in Seattle and across the country will greatly miss her, too.

A celebration of her life will be planned for a later date. For additional information and updates, please visit Nancy’s Care Page at carepages.com/searchNancyColbert.

I worked with Nancy at various times over the past 20 years. She was a grand person; kind, thoughtful and wonderfully intelligent. It was a pleasure knowing her. She is missed.

Nancy was a friend from early childhood. We spent many sleep-overs with each other and shared years of Girl Scouts, school and family adventures. I remember when they moved into a new house and we took the boxes from refrigerators and stoves and decorated them into houses. When Nancy and her sisters moved away we kept in touch on and off through the years, because of the strong bond we'd had as children. I'm sorry to hear of her life too soon ended.