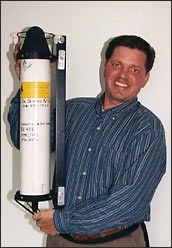 The acoustics and oceanography communities lost an admired colleague Jeffrey Nystuen in September. Jeff had been a research professor at the Applied Physics Laboratory at the University of Washington from 1995 until his retirement in 2018. Jeff was the 2003 Medwin prize winner of the Acoustical Society of America. He was named Fellow of the ASA in the same year. From 2009-2011 he was a European Commission Marie Curie Fellow at the Hellenic Center for Marine Research in Anavyssos, Greece. He was born in Seattle, grew up in Ann Arbor, Michigan and was a graduate of Pioneer High School in Ann and the University of Michigan.

Jeff earned a Ph.D. in physical oceanography at Scripps Institute of Oceanography/UCSD in 1985. While a graduate student Scripps, Jeff’s doctoral advisor Robert H. Stewart remarked that satellite measurements of rainfall at sea were suspect because of the lack of any surface measurements. Walter Munk, his co-advisor, suggested that oceanic rainfall measurements could potentially be made by listening to the sound that rain makes underwater. This suggestion became the focus of Jeff's scientific career. His thesis Ambient Noise Measurements of Rainfall was completed in 1985.

Jeff is widely regarded as a pioneer in acoustic rainfall measurement. By monitoring the sound of rain falling on the ocean, Jeff was able to learn about patterns of rainfall and cloud formation over the open ocean. Knowing more about the role of rainfall has given meteorologists a better understanding of weather phenomena such as El Nino, and the floods and droughts that it triggers around the world.

After graduation, Jeff spent one year with David Farmer at the Institute of Ocean Sciences in Sidney, BC, and then accepted a position as Assistant Professor of Oceanography at the Naval Postgraduate School in Monterey, CA. While at NPS, he studied the sound of individual raindrop splashes with Herman Medwin, a physics professor, and established several field projects measuring the sound of rain at sea.

In 1993, he took the opportunity to participate in a rainfall measurement experiment being conducted by the Ocean Acoustics Division of the Atlantic Oceanographic and Meteorological Laboratory (AOML) in Miami, FL. This experiment lasted 2 years, during which time every second of rainfall in a pond at the laboratory was recorded acoustically and with ancillary rain gauges. These data confirmed the ability to quantify rainfall acoustically.

In 1995, he joined to the Applied Physics Laboratory and later became an affiliate faculty at the School of Oceanography of the University of Washington in Seattle, WA. There he developed a passive acoustic recording system for collecting underwater sound. The instrument was called an Acoustic Rain Gauges (ARGs) and later renamed to Passive Aquatic Listeners (PALs). He advocated for a smaller data size through intelligent sampling schemes. He established a field program to measure rainfall at sea using his acoustical technique. Measurements were made in cooperation with NOAA, NASA at locations near Cape Canaveral, FL, in the eastern equatorial Pacific Ocean and in Crater Lake, OR. He also collaborated with Hellenic Centre for Marine Research (HCMR), Heraklion Crete, Greece for the Ionian Sea acoustic rainfall project.

Jeff was an accomplished birder. His life list numbered ~3023 unique species. He recorded his first bird as a ten-year old in July 1967 -- Surnia ulula (Northern Hawk Owl) -- on the Tazlina Glacier in Alaska.  His last life bird was a Milvus milvus (Red Kite) recorded in November 2019 on the Osuna Steppes of Granada Spain, one of 11 new species he spotted on that trip. He had planned to make 2020 his Big Year, but trips to Morocco and New Caledonia were cancelled by the coronavirus pandemic. In addition to birding, he was also an accomplished travel diarist, nature photographer, contra dancer and potter. He is survived by his parents in Ann Arbor and sister and brother-in-law in Massachusetts and Maine, aunts, uncles and cousins in Oakland, CA, Hawaii, and Albuquerque and Los Alamos, NM, and many friends in Seattle and around the world.

Jeff was a generous and insightful colleague, collaborator, advisor, and mentor. His perspective gave the sound of rainfall special meaning. Whenever we hear raindrops on water, we think of him.

This is a terrible loss. I met Jeff when he was working at IOS and then kept in touch from time to time at conferences and by reaching out with questions on ocean noise. I remember Jeff as a gentle person who had a sparkle in his eyes and as someone who always made time to help out.

My condolences to Jeff's parents and sister. His friends will, of course, remember his love of bird watching and his many international travels to do so. And, likewise, they will note his love of his Maine Coon cats. Those two interests were combined when he and I went to Alki Point with his scope to check out the birds, then stopped at a cat adoption event, where he helped me pick out a new cat for myself. Well, our taste in cats differ, and I picked a small, shorthaired female cat, but I appreciated his encouragement and support!

My condolences to Jeff’s family. I am just learning of his passing. Jeff was a sweet man who occasionally picked up food from me and would often chat about his travels, adventures and his personal battles. He was an authentic person I always enjoyed seeing and I will miss him.

Jeff was my only brother since we met back in 1976. an everyday companion, cheerful and musical with his morning clarinet rehearsing uncompromisingly Rapsody in blue. Clever, brilliant and fun! He came over visit me in Paris and we gathered again in our splendid Ann Arbor for the High School 40rh reunion. Dad, Mom, Leslie my deepest condolences in such a sad, painful moment. Jeff will always live in my thoughts and deep in my hart

I was so sorry to hear of Jeff’s passing. We were friends in high school and dorm roommates during freshman year at Michigan as well as housemates junior year as a group of us “house sat” his family home on Olivia while his parents were away on sabbatical. Many memories of that time, especially care for Hab (long A), the house screech owl who was very sweet and a much beloved family member. Rest in peace Jeff. We know more of our world because of you.