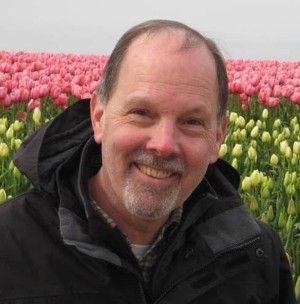 Rex Eugene Allen died early November 25th, 2017 at home of a heart attack. His life started in McAllen Texas October 10th, 1950  the son of Geri and Ralph Allen and brother to Gary. Rex is survived by his husband Vince Healy, the extended family (the Allens, Garrisons, Healys….) mother Geri, Gary and Rachel Allen, nieces Julie Matthews and Susan Raff, and Toby the Coonhound. Many knew him growing up in Dallas, at Baylor University, in his Seattle theater work, volunteering in Shanti, and for the last 25 years, in his care for the bereaved at Hospice of Tacoma and Providence Hospice. Rex served with the National Hospice and Palliative Care Organization for ten years and locally as a trainer, presenter, and a maker of healing ritual. We grieve our loss of his compassion, sensitive listening, quiet speaking, and his ability to see the better qualities in us and others (that we may have not known were there). When he saw and coaxed those qualities to come forward, they became unexpected blessings. A celebration of Rex’s life, and a time to share a wee bit our loss and joys of Rex, will be at Daybreak Star Cultural Center at Discovery Park in Seattle 1/6/18 at 1:30pm. Remembrances can be given to The Providence Hospice of Seattle Foundation or to any act of charity that calls your heart.