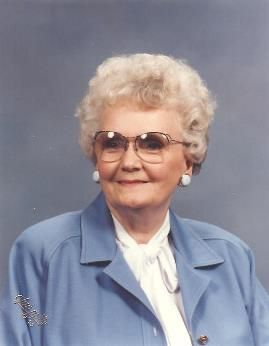 Marian was born in Everett, WA on July 12, 1919 to John T. and Hattie Waide Johnson.  She grew up in Santa Rosa, CA and Everett, WA where she graduated from High School.  In 1939 she received a BA from Seattle Pacific College and married Roland B. Lewis.  They had two children, David Warren Lewis and JoEtta May Lewis.  After Roland completed his Doctorate in Education at Stanford University they moved back to Seattle where they were instrumental in starting Homebuilders Sunday School class at First Free Methodist Church.  She taught school for several years.  Marian was a member of Sigma Rho and the Cana Sunday School Class where she held leadership positions.  While Roland was a professor at Eastern Washington University in Cheney, WA they were involved in the United Church of Christ.  Roland passed away in 1989 and in 1990, Marian moved to the Crista Retirement Community in Shoreline, WA where she continued organizing dinners and social events. She passed away on Dec. 31, 2014 after a short illness.  Her positive attitude about everything she encountered in life was an inspiration for all who knew her.  She was at peace with God, her family and friends and will be missed. Daughter, JoEtta, preceded her in death.  Son, Dr. David W. Lewis and wife, Ginie, grandson, Steven and wife Kimberly and granddaughter Sonya May Owens and husband Roger and five grandchildren and one great-grandchild all live in California.  Nephew, Howard and wife Shirley live in University Place, WA and niece, Barbara, lives in Sanford, Florida. Marian supported many wonderful causes.  She particularly loved programs for kids, so in lieu of flowers, please consider giving a donation in her name to the program of your choice.

Marian will be remembered at two memorial services:

Absent from her body to be present with her Lord and Savior Jesus. John14 1 "Do not let your hearts be troubled. Trust in God. Sonya take comfort in knowing that your Grandma loved you very much,you help'd fill a void in her heart after losing your Mom... We love you Crissy&Ray

Sonya, David, Howard, Shirley and those close to Marian in her home at Crista you know best the power of her Life and Spirit.I remember when Marian & Roland used to drive down from Washington every year to do projects for Joetta in San Francisco, Mill Valley & Santa Rosa. They usually arrived with tools and energy to do all kinds of projects-i recall when R. raised the ceiling in the MV house and M. was sewing or cooking something .It has been years but I still looked forward to her Christmas letter & this year received a handwritten note, she mentioned Karl & years gone by. I turn toward you in your loss with Love and condolences. --Anita May & Karl Derfler

The world is such a better place for having Marian and Roland in our lives. They were both so good to all they knew. We loved hearing their stories. My dad was Roland's cousin, and they were close. We always enjoyed visiting Marian at Crista. She was an inspiration, and gave us her favorite book on the Bible. So caring and sharing. She was so proud of her family and friends. We miss her. --Kathy Snyder