Facing Death as a Teenager, Part 1

Meet Jared, our funeral director intern. People are always asking us how we ended up in the funeral profession. Jared’s road was rockier than most. This begins our series on answering one of the most frequently asked questions of us:

What made you want to become a funeral director?

Cancer. That word was only relative to me and to the weird girl in school that always talked about astrology. I mean don’t get me wrong, I knew what the illness was. I knew how serious it was. But to be told at 16 that I, myself, have it, it didn’t really compute. People who get diagnosed are old. They are already on their way out. But me? At 16 years old, I just had gotten my license. I had just had my first serious “break up.” I had just gotten my first job, and being a teenager, begun the illusion of invincibility. 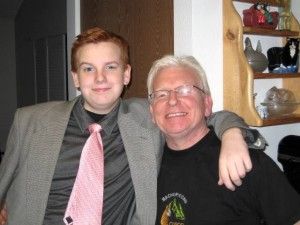 On my 16th birthday with my father, Robert.

It all started at my job. About six months prior to my diagnosis, I started working at a feed store. The average weight of a bag of feed is fifty-ish pounds and customers would order hundreds of pounds of the stuff. My job was to get what they wanted out of the back, and bring it to their trucks. I would have to move very quickly or I would get behind. It was very physically demanding.

After about a month of working there, I started fainting on the job. I was carrying something very heavy and all of a sudden I woke up with it on top of me. Being the dumb kid I was, I kept it to myself thinking it was nothing, until it happened in front of my manager and she immediately made me see a doctor before I could come back to work.

Nothing got accomplished after seeing the doctor. He just said I wasn’t retaining enough water and I was dehydrated. Skip forward about 4 months. I was losing weight like crazy. Again being a dumb kid, I just thought it was me growing into my new body, I have always been on the bigger side, so I just thought it was puberty.

I continued doing the normal stuff all the guys in my age group were doing, just being a normal kid, until about a couple weeks after Christmas I got really ill. I mean sinus infection, green mucus, really, really sick. I had a huge inflamed gland in my neck. I wasn’t looking good. I come from a family where its last resort to go to the doctor. I finally hit a point where even my family was realizing I should go in. After visiting with the M.D. he prescribed me some antibiotics to combat the infection. Our session was about to finish when I mentioned the gland in my neck. I could see on the doc’s face while he feeling the right side of my throat that I was in trouble. He set up a biopsy.

I went in, had the minor surgery, and went home. About 2 days later the results came back that it was cancer. Metastatic. I got a Pet CT scan and found out the extent of the damage. So remember how I kept passing out at my job? The mystery to why this was happening was finally revealed. There was a tumor growing alongside my heart. It was literally the size of a softball. It was restricting the pumping of my heart. I also had tumors throughout my spleen, my groin area, my armpits, my neck, basically everywhere I had a lymph node, a tumor had found its new apartment.

My diagnosis was Hodgkin’s Lymphoma Stage 3 D. It could have been stage 4, but the doctors didn’t feel it was necessary to check my bone marrow. I immediately started treatment at Swedish Medical First Hill Campus.  There was a chance I was going to survive this, but it was 50/50. I was always a pessimist so that was a limbo type statistic. I guess it was all up to me. But the idea of being set on survival was difficult, because if I were to be disappointed with the outcome, it would kill me, literally. This was all messed up to think about when you’re a kid.

So that’s the back story, but why am I writing about it here? I wanted to discuss the feelings and the actions that have affected my life after being faced with the reality of death at such a young age.

In coming posts, I will talk about my family and our experience during those years living with the specter of death around the corner. 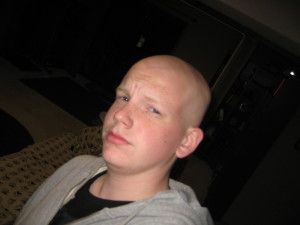 In the midst of treatment , and where my next post will begin.

Kate Donmoyer
Posted March 21, 2014 at 12:42 pm
Looking forward to reading the rest. You are a great kid Jared! Love you

Ted Donmoyer
Posted March 21, 2014 at 3:58 pm
Good Lord, Jared, I never realized how widespread the cancer was. I am so proud of all you have accomplished and look forward to reading the rest of the story of your amazing journey.

Dan Donmoyer
Posted March 27, 2014 at 3:35 pm
I remember it all like it was last year brother i love you and i don’t know how my life would be today if you hadn’t made it. Here’s to many more years to come and growing old side by side. love you man you truly are blessed.