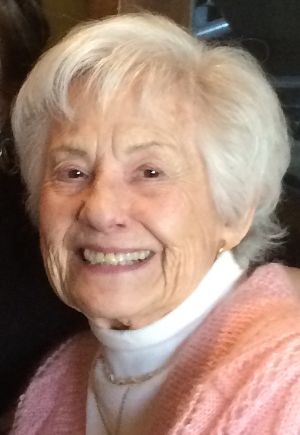 Betty Jane Kill passed away at home with family on the morning of November 1, 2019.  She told family, friends, and doctors that she was at peace with death as her body began failing, believing that 94 years of a wonderful life had been the greatest of blessings. On August 30, 1925, Betty was the second of three daughters born to Emma and Raymond Rex Goodman in Marienthal, Kansas, where her parents farmed until dust storms prevailed. The family relocated to Colville, Washington, where her father worked in her great-uncle’s silver mine, and she remembers a home there that was a happy storybook house in the woods. When she and her older sister reached school age, the family moved to Wenatchee, Washington, and then at middle-school age another move took them to Mankato, Minnesota, so that her father could work in an uncle’s hemp manufacturing plant.  In Mankato she loved attending Saints Peter and Paul Catholic School.  A new plan was made to move back to Wenatchee but a detour to see grandparents and family in Colorado and Kansas turned into a one-year stay to help those who’d lost farms to the dust storms.  Eventually many family members moved to Washington State, and Betty’s family settled in Wenatchee for good.  Betty was graduated from Wenatchee High School in 1942, and went on to Western College of Commerce where she majored in accounting, and at that time also worked as an usherette at the Liberty Theater.  There, she met the love of her life, Louis Edward Kill, who was the theater’s assistant manager. They were married on Valentine’s Day, 1946, at St. Joseph’s Catholic Church in Wenatchee, following a three-year wartime exchange-of-letters courtship while Louis served in Europe with the US Army’s 101st Airborne Division.  A gifted seamstress, Betty was married in a gown she fashioned from the silk reserve parachute that Louis had sent home for her. Betty and Louis raised three children in Wenatchee and lived there all their married life until their 2003 move to Seattle to be closer to their daughters and grandchildren. Betty was involved with church religious education and community activities while her children were young, continued to sew beautiful clothing for her family and herself, was active on the YMCA Physical Education Committee, as well as being active in YMCA sports, particularly in volleyball and tumbling.  During that time she also enjoyed modeling for MacDougalls Department Store, stayed active in her children’s school lives and activities, and in family activities such as fishing, golfing, boating, water skiing and snow skiing.  Once her children were in school, she began working, part time at first, using the skills of her business education.  She was office manager for a media engineer, and then executive assistant to the manager of the Westin Cascadian Hotel, and finally had a twenty-three year career at Seattle First National Bank, eventually becoming a Trust Officer and Assistant Vice President of the bank.  After retirement Betty and Louis traveled widely in the US and Europe, and spent many happy winters in San Carlos, Sonora, Mexico.

Betty Jane Kill was beloved, and leaves behind a grateful family who will remember in particular her dazzling smile, her generosity, and her great faith. She is preceded in death by her husband, Louis Kill, and her sister, Eva Longuskie.  She is survived by her sister, Alice Hite; by her children, Victoria Kill, Katherine Norige, and Thomas Jirgensohn; by her granddaughters, Kristin Ekanger Lo Conte, Melanie Kill, Nicole Leith, and Stacy Workman; and by her great-grandchildren, Kaylee Amado, Noah Workman, Augustus Lo Conte, Kyree Carmichael, Sonja Trudell, Analise Workman and Sophia Workman.

Her funeral Mass will be held at 11am Thursday, November 21, 2019, at St. Joseph Parish Church, 732 18th Ave East (at Aloha), Seattle WA.  A lunch reception at the Arrupe Room in the Parish Hall will follow.  In lieu of flowers, Betty would prefer donations to a food bank or shelter or other charity of your choice.