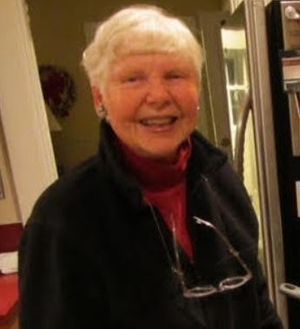 Janet Livingstone, writer and music critic, died March 12, 2021 in Seattle, Washington. She was 94. Born in Fargo, North Dakota on April 29th, 1926, she attended the University of Iowa, moving to San Francisco in the late 1950s, where she reported for the San Francisco Chronicle, and worked at Freeman, Mander & Gossage, an advertising agency.

Living on Lombard Street in the late 1950s and 1960s--on the crooked part of the “crookedest street in the world--” Janet made many musical friends and loved the neighborhood’s bohemian social life. She enjoyed memories of playing music and trading bon mots late into the night with Charles Burns and Leslie Dorking, then as the sun rose, donning her trim plaid suit and getting to work at the ad agency in the early morning.

One of her fondest memories of that period was bringing the Irish Whiskey account to Howard Gossage, for whom she worked. She was later on hand at the Buena Vista Cafe when he and Jack Koeppler hatched the idea of creating “San Franciscan Irish coffee.” Her years in advertising with “Gossage” at the Fire station were some of her favorite memories.

Janet fell in love with Ireland, and identified so closely with its music and poetry that many friends assumed that she was of Irish heritage, though she was not. In the 1970s, she worked for the Kilkenny Workshops, a project of the Irish government that supported the continuance of traditional Irish weaving, which had almost disappeared by the 1970s. She designed and then managed the Kilkenny store in San Francisco’s Ghirardelli Square for many years.

Janet decided to go back to school in the late 1970s, and received her MFA in Musicology from Smith College. She cherished her time learning from Andrew Porter, one of her advisors. Returning to San Francisco, she wrote articles about opera, and reviewed Bay Area musical performances. She particularly enjoyed reviewing the chamber performances of Pocket Opera, and was a great fan of its founder, Donald Pippin.

A punctilious grammarian and editor as well as musician, Janet worked for many years as a copyeditor on Robert Alter’s translation of the Hebrew Bible. She was deeply gratified when it was published in 2018.

Janet loved music, writing, her dear friends, all animals, T.S. Eliot, anything made by Apple, beautiful fabrics, painting, gardening, walking, a good mug of Major Dickason’s blend, and her constant companion, KING FM 98.1. Her courage, sensitivity, deep listening, faithful friendship, and thoughtful intelligence added much to all our lives. We will miss her mischief.