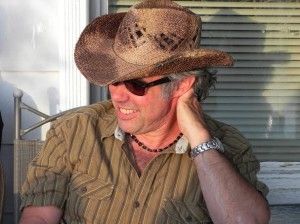 Wayne Foster — husband, father, craftsman, friend to many, artist, and lover of music, books, gardening, and conversation — died at age 58 on June 8, 2014 after a six year fight with thyroid cancer. His family — wife of 32 years Catherine Erickson, sons Graham and Martin Foster, daughter-in-law Lauren — were with him, and he died on his eldest son’s birthday. To Wayne, it was evidence of the cycle of life, and the eternal bond of a family that was more important to him than anything else.

Wayne had the heart of an artist and loved all art forms, especially music. His first concert, in 1971, was the Allman Brothers at San Francisco’s Winterland, one of Duane Allman’s final shows. It began a love of listening to and playing music that stuck with Wayne. His last concert occurred in his home, just a few weeks before his death, when Dave Alvin and Christy McWilson performed for him in his living room. Mr. Alvin had not yet met Wayne, but had heard what a special man he was.  That was the effect Wayne had.

Wayne grew up in the Bay Area. He met his wife Cathy in 1975 in Humboldt County where he went to school and fought fire during the summers; they soon found their paradise on 40 wooded acres there.

They married in 1981 and moved to Seattle where Wayne worked at Cellophane Square. He then began his career as a skilled carpenter and craftsman. He could craft almost anything with wood, and remodeled five of his own homes. He said the skill was “genetic, passed down from my father.” His dad was an early machinist at Hewlett-Packard. Wayne’s unique approach went beyond blueprints and captured a Zen-like essence to his wood-grain infused projects.

Wayne’s generosity was boundless with friends, which he made wherever he went and kept as long as he lived. He was “the host with the most,” and his parties would invariably include musical jams running late into the night with an ever-changing group of musical friends he often referred to as the Richmond Beach Ramblers.

Wayne cared deeply for all living things. He maintained a righteous garden. Over time, he had five beloved dogs  — Noche, Kiera, Sheena, Nelly, and Stella who went everywhere with him.

In 2006 Wayne and Catherine moved to Innis Arden to live near the trails and natural setting of the Blue Heron Reserve. Wayne walked Richmond Beach with Stella nearly every day, and he had a knack for finding beach glass that was uncanny.

Wayne was reluctant to leave this life, where he found so much beauty and so much love, but he never expressed regret or saw his illness as defining who he was. “We’ve created a great life together,” he would often say to his wife. And that they most certainly did.

In lieu of flowers, donations in his name may be made to People for Puget Sound –www.pugetsound.org.  Share memories on his online obituary at www.funerals.coop.

Sandy & Bill Tanner
Posted June 13, 2014 at 10:44 pm
We loved Wayne and we are richer for having known him. He was a special man whose positive outlook on life touched our heart. We are so blessed to have had the opportunity to call him family. Mere words can never truly, nor accurately describe him as a person and as a brother-in-law. To know Wayne, was to love him.

It is utterly inconceivable to imagine our world without his wit, his perception, his love of family, of friends, of music … his humor, his friendship and his immeasurable kindness. And yet, we are now left in exactly such a world.

Our heart aches for Cathy, Graham, Marty and all of Wayne’s family. We are deeply saddened and extend our heartfelt sympathy. Know that he was loved and he will be missed.

With our deepest love,

Sandy & Bill Tanner
Posted June 13, 2014 at 10:51 pm
We loved Wayne and we are richer for having known him. He was a special man whose positive outlook on life touched our heart. We are so blessed to have had the opportunity to call him family. Mere words can never truly, nor accurately describe him as a person and as a brother-in-law. To know Wayne, was to love him. It is utterly inconceivable to imagine our world without his wit, his perception, his love of family, of friends, of music … his humor, his friendship and his immeasurable kindness. And yet, we are now left in exactly such a world. Our heart aches for Cathy, Graham, Marty and all of Wayne’s family. We are deeply saddened and extend our heartfelt sympathy. Know that he was loved and he will be missed.

With our deepest love,

David and lesley
Posted June 14, 2014 at 1:32 pm
We were not prepared for this yet this does not matter. We send our love to Cathy and the boys and all who sat and shared Wayne’s last months on this earth. What a big heart Wayne had! Love D&L

Lisa Condran
Posted June 15, 2014 at 3:40 pm
Wayne was the kind of person that made you feel better about the world because he was part of it. He will be deeply missed by many. I love how both Wayne and Cathy made me feel welcomed into the Humboldt family in April 2006. I appreciate how much the friendship of both Wayne Dog and Starflower has meant to Mark. They are both a part of who Mark is. Wayne, while talkative, was a quiet man in other ways–humble about all of his accomplishments, which were many. Wayne had a gift for making anyone comfortable and celebrated. In essence, Wayne did so many positive things in a subtle, humble, yet powerful way. I admire his creative abilities and the love he shared with a wide circle of family and friends. I am sad he is gone, but grateful to have known him. I hope right now he is enjoying a quality microbrew, playing the ukelele, and saying hi to Nellie!

Robin Foster
Posted June 18, 2014 at 12:57 am
I’m stunned and saddened to learn just last night of Wayne’s passing. Recalling his wit and humor and the beautiful remembrance and eulogy he delivered at his dad’s (my favorite Uncle “Buddy’s”) service. Seems just yester-day. How the years have sped by since we all did the Hula or danced to Toni and Valerie’s James Brown records. Hah! Remembering what an adorable shy, quite, observing little boy whose beautiful eyes and smile lit up the room (just like his dad) when he walked in. Played the Ukelele? So does Haley! Wish these pair of cousins had, had the opportunity to jam!

My heart goes out to Cathy, Graham, Marty, Toni, Valerie- all of Wayne’s loved ones.

“A human life is a story told by God.” Hans Christians Anderson “To live in the hearts we leave behind is not to die.” Thomas Campbell

Perhaps they are not the stars, but rather, openings in heaven where the love of our lost ones pours through and shines down upon us to let know they are happy.

Psalm 10:17 O Lord you hear the desire of the afflicted; you will strengthen their heart; you will incline your ear.

2 Corinthians 1:3-4 Blessed be the God and Father of our Lord Jesus Christ, the Father of mercies and God of all comfort, who comforts us in all our affliction, so that we may be able to comfort those who are in any affliction, with the comfort with which we ourselves are comforted by God.

As we comprehend this profound loss, may we let ourselves cry knowing each tear is a note of love rising to the heavens. Although no words can really help to ease the loss you bear, just know you are very close in my every thought and prayer. Love, Robin Foster

Blessed are those who mourn, for they shall be comforted. Matthew 5:4

John and Sheryl Alle
Posted June 18, 2014 at 2:49 pm
To Wayne Foster – A true Renaissance Man, a lover of life and the world we live in. What a special friend you have been. I truly value the things we shared: instant friendship the day we met, an appreciation for the lyrics and riffs of Jimi, Jerry, Eric, Graham, Neil, and other Gods of the music world, the sparkling waters of Wooley Creek, the September wispy clouds over the Klamath mountains that yielded rainbows in the sun.

Your listening skills were uncanny; months later you would kindly repeat the meaningful parts of what you heard from us all, and then offer insightful comment to make us think a little deeper.

Your family and many, many friends will remember you dearly. Love Ya, JA (John Allen)

Mike Hawkins
Posted June 20, 2014 at 1:16 pm
Wayne, ways a special friend, though we lived life in earlier time than the now, though we stayed in touch. Most of our/my stories of Wayne cannot be told here and with his most present friend relating on him being a good & Renaissance man, which he was. I and a couple of others knew him in the earlier parts of his great life, the pagan years…we had some great & life building times..always dear to me, just because him & I always could remember them as a GOOD time. I’m so sorry I couldn’t be there today at his celebration of life but I am thinking of him always and my heart and crazy stories are going out to Cathy & the whole family & family of friends, and YES I remember who Graham is named after! Love to all! Humboldt Lives!