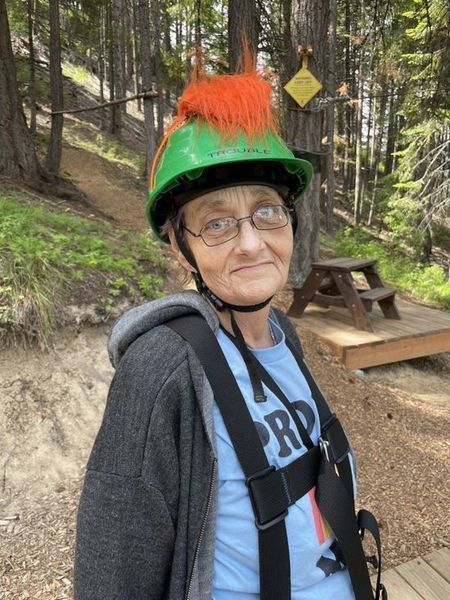 Beverly Ann Carl (Blackwell) was tough as nails but had a heart the size of Texas. She would give the shirt off her back to someone in need … unless she happened to be wearing her Dolphins jersey; there was no parting with that. It’s fitting that she left this world on April Fool’s Day; we figure it was her last chance to mess with us. Bev learned to truly live later in life, and she made both her daughters more proud than she’ll ever know. She ran her first 5k at age 58, and she earned her degree a year later. At 66, she let her youngest daughter, Jen, talk her into zip lining, and Jen lived to tell about it. Though life in recent years kept her on a nearly constant rotation of doctor visits, Bev had the best of times traveling the country in recent years. Her pure enjoyment of the adventures was evident in the random packages she shared with her oldest daughter, Stephanie. Jen will be hard-pressed to compete with the owl vomit that showed up in last month’s adventure package. While she adopted some new pastimes in her later years, there were a few constants in Bev’s life. She loved her dog Teddy, was always down for some holiday baking, (no matter the month), and almost always had a book on hand. She enjoyed country music - especially Reba, and she probably watched more hours of sports than anyone. Bev leaves behind her daughters Jen and Steph, bonus daughter Annie, a slew of “adopted” adult kids, siblings Tom and Debbie, her niece and nephews, and loving friends/adopted family Deb,  Karen, and Richard. She also leaves behind an impressive collection of Tupperware and made sure Jen had a freezer full of soup. While those left behind will mourn Bev, we can rest easier knowing that she is now reunited with her daughter Holly, parents Tom and Catharine Blackwell, and nephews Tommy and Ryan. In lieu of flowers, her family asks that donations be made in her name to the University of Washington Medicine Scholarship Fund, which supports her passion for life-long learning and continued growth of the medical community. There will be a visitation for Beverly Friday, April 8, from 5-6 p.m. at the COOP Funeral Home of People’s Memorial, First Call Plus Building, located at 6942 S. 196th Street, Kent, Washington 98032. There will be an interment in Bethlehem, Pa., at a later date when Bev is laid to rest with Holly.

Miss Beverly was truly a light and a joy. I always knew that my shift would be a good one if i saw that she would be working alongside me. While her physical work presence will be missed and could never be replaced, i know that the love and joy and kindness that she radiated will forever live and be exuded from her beautiful daughters. My heart is with you all! I’m grateful to have had the opportunity to cross paths with Miss Bev