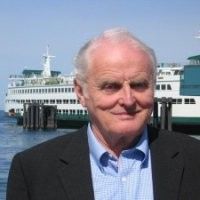 Edward Martin Hynes died Feb 6, 2019 at Northwest Hospital, Seattle, after a long battle with cancer. Born Sept 10, 1932 in Kent, WA, he was the son of the late Martin and Ellen Warren Hynes. He married Unni Lindberg in 1956 after meeting her at the Norway Center in Ballard, WA and had 4 children - Linda (James Gooding), John (Janet), Richard (Leslie) and Karen (Joseph Kowalchyk).  He was an adored grandfather to Brianne (Nathan Peterson), Steven, Casey, Erik, Adam and Anna.

Ed graduated from Quillayute High School, Forks, WA in 1950 where his mother was a teacher, graduated from Everett Junior College where he participated in track and then from the College of Business Administration at University of Washington in 1957. He served his country by attending the US Army Finance School during one of his breaks from college.

Ed became a CPA in 1957 and practiced for many years before establishing Restaurant Seminar Institute along with his partner Walt Matysik. They assisted restaurant owners across the country by showing them how to financially manage their restaurants better for increasing profits.

Mr. Hynes excelled in public speaking and was a lifelong member of Toastmasters and loved to make others laugh through his magic, jokes and sense of humor. He was compassionate towards others with lifelong struggles and tried to help them succeed.

Ed was very fond of the outdoors and took his family on many adventurous outings - camping, hiking, blackberry picking, fishing, canoeing, snowshoeing and digging for razor clams. He was often found outdoors in his Norwegian sweater walking around Green Lake or on the beaches and liked it better when it was raining. His love of the Pacific Northwest inspired him to climb to the top of Mount Ranier in 1974. In later years, he and his wife traveled to many countries including Norway, Ireland and China and also purchased a cabin on Herron Island of which became their second home. He instilled in his children his love for the outdoors and traveling and on any given weekend his children and grandchildren can be found hiking, clam digging, snowshoeing or doing other adventures.

He was preceded in death by his beloved wife, Unni Hynes of 51 years in 2007 and nephew Dag Erik Lindberg. He is survived by his girlfriend, Elena Johnson, who helped Ed enjoy his later years with full of love, laughter and dancing, all of his children, grandchildren, brother - Warren Hynes (Elaine), nieces – Kristin Lindberg, Gail Coulson, Joan (Ed Murray) and numerous friends including Madelaine Ramey of whom he has known for over 30 years.

We especially thank his oncologist physician "Eddy" - Dr. Edmond Marzbani who gave him hope through compassionate and individualized care at the Northwest Hospital Cancer Center.

A Memorial Service will be held on March 16th from 2-4 pm. at "Lakeview Room at Lake Ballinger", 23000 Lakeview Drive, Mountlake Terrace, WA 98043. Please join us for a celebration of his life. Light refreshments will be provided.