Death and the Salesman 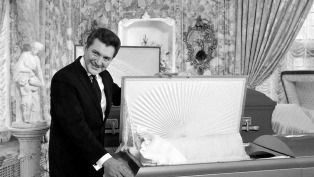 There are many facets to working in the funeral industry. On the front side, the majority of what we do is service based. We meet with families to discuss arrangements, gather the appropriate authorizations, file death certificates, and order certified copies of those death certificates.

Behind the scenes, however, there is a large portion of our jobs that is just business oriented. Much of this business revolves around vendors who sell everything from urns to caskets and everything in between. On a daily basis we get advertisements in the mail that sell products with names like the Kanga-Woo (cot covers) and BereaveMints (breath mints made for funeral homes). These are literally two advertisements placed on my desk as I’m writing this post. We weed through these ads trying to decide what our families might actually care about and what we can toss in the recycle bin, thankful that at least the name gave us a chuckle.

The bigger vendors have sales representatives who will come in to the office periodically to provide updated pricing and introduce new products. It was during a meeting with one of these sales reps that I had adverse reaction to his sales pitch.

He was showing me a line of cremation caskets in a catalog and said, “I know how you do business here, but I just want to let you know that other funeral homes don’t even give families the option of a casket-less viewing.” Pointing to a particular cardboard casket (officially called a basic identification box), he continued, “They require families to use this for basic viewings and they don’t get any push back. It’s not an economic issue, it’s a dignity issue.”

It was this last sentence that made my blood boil so fast I couldn’t even think of a good response. Like a rash, the heat and irritation grew until I was fuming with anger and frustration. In fact, it took a full day of stewing before I could even articulate why I was so angry.

This sentence is exactly what is wrong with the current state of funeral service. It is said with the veil of speaking to the best interest of the families, when in reality they are just looking to increase their profit.

It is not our place to tell a family what is dignified. Dignity to one person might mean gently placing a rose on their loved one while they lay on a cot, and to someone else it might be nothing less than the most expensive hardwood casket. Dignity is giving people the choices to make their own decisions.

I’m going to say it again. Dignity is giving people the choices to make their own decisions. The Co-op Funeral Home may be most recognized for our direct cremation and simple funeral services, but we can and we do provide so much more than that when a family requests it.

So in response to that sales rep: No. I don’t think you do know how we do business here. I will provide a basic identification box as an option for my families to choose, but I am not going to make that decision for them.