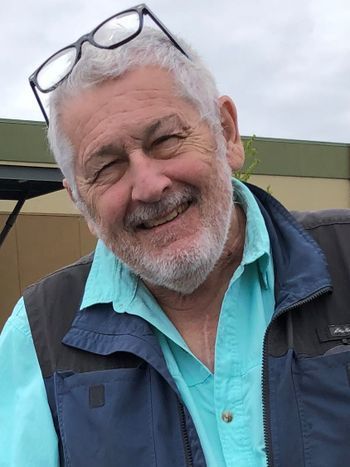 Bill Stalder regularly said “Every day I wake up is a good day” when asked how he was doing. He lived through a lens of gratitude, curiosity, and wonder.  He was delighted by a new barbecue recipe, a smoothly flowing fountain pen, an unusual bird call, baking bread, a political debate or getting three Yahtzee’s in one game. Bill found joy in creating a “perfect” cup of coffee, reading a cookbook cover to cover, creating art out of Iphone photos, eating raw, fresh oysters, or pondering a scientific fact. His mind was occupied by questions of philosophy, faith, and the nature of “being.”

Bill was a voracious and eclectic reader with 5 library cards, and he spent hours on Spotify listening to a wide variety of music.  He loved dogs and asked each one he met “where’s your ball?” He spoke to cats as they curled up on his lap: “What do you think the meaning of life really is?” He was enchanted by living in the woods near the mountains, walking the ocean jetty during storms at Cape Disappointment State Park, traveling across the country in a travel trailer with his wife, Diane, and his time living aboard his sailboat.

Bill grew up in Los Angeles attending Catholic schools until his sophomore year in college. During high school he excelled in debate and was on the swim team. He had experienced a call to priesthood in the 6th grade which led him to pursue that vocation at Maryknoll College. He left at the end of his 2nd year, recognizing that adhering to the authority of the church and foregoing marriage were not aligned with his values. Transferring to the University of California at Berkeley in the late 1960s immersed him in the Free Speech Movement and Vietnam War protests. It led Bill to question the basic relationship of government and the governed.

He was a man of convictions, rooted in his faith. In 1979, to protest nuclear weapons, he repeatedly climbed the barbed wire fence into the Trident-nuclear-submarine base at Bangor, WA. He was sentenced to, and served, 90 days in the King County jail. In a court statement he addressed the judge.  “There are moments in the human community when the force of the demonic so threatens to destroy the fabric of society, indeed seeks to destroy in a mindless way the lives of millions of people, that the very substance of our faith demands an active prayer that strikes at the root of evil, and by necessity, at the root of law.”

For 20 years, Bill was involved in the ecumenical life of the church through Campus Christian Ministry at the University of Washington, The Church Council of Greater Seattle, the Washington Association of Churches, Bread for the World and the Lutheran Student Movement. In the 2000s, Bill earned a graduate degree in theology from Seattle University.

He was employed by the Public Development Authority (PDA) that manages the Pike Place Market for 25 years. His roles there included being the data processing manager, the Market Master, coordinating the farmers and crafts people who work in the stalls, and Deputy Director, overseeing operations of the PDA. He was known for his great ability to listen and improve relationships among staff and was named Employee of the Year.

In the years leading up to his work at the Market, Bill taught 7th grade in an Oakland Catholic grade school, managed a coffee store similar to Starbucks, was a cook in a French restaurant, worked in a high tech photographic firm, and opened the Market Café to provide low cost meals to low income elderly living in the area of the Pike Place Market. He was passionate about cooking.

Bill believed that resisting rules was a good practice. At Maryknoll he started an underground newsletter. In college he cited “Dr. Redlats” in one of his papers (Stalder spelled backwards). At times, his wife Diane, had to reign him in from the advice he was giving her teenage sons. His granddaughters called him “Grandpa Bill, the trickster.” Whether suggesting pranks they could do or fooling them with stories that weren’t true, there was much giggling involved. Bill’s witty sense of humor brought laughter to many.

He was always interested in the stories of people he met and cared about their lives. He knew the health challenges the grocery clerk’s mom was facing and the retirement hopes of the dental receptionist. He had a focused way of listening and asking questions that led family, friends, and strangers to trust sharing the things on their minds and in their hearts.  He valued family and a sense of belonging.

Bill and his wife Diane met each other later in life. They were grateful every day for the deep, soul-stirring love they experienced. They encouraged and supported each other to take the risks to live life fully and with integrity.

A celebration of Bill’s life will be held in May.

What a beautiful testimonial to an exceptional man…I learned so much about him that I didn’t know. I am so grateful that you had him in your life—and saddened that the time was too short. Sending lots of love,
Liz

Diane,
This portrait of Bill is absolutely beautiful. He was a man of exceptional integrity, depth, generosity, love for life and the people he cherished. I am profoundly grateful to have known him. I wish I could be physically present for the celebration on May 15. I will be holding you in my heart that day.
With love, Melanie

What a wonderful man. I’m happy you found each other and shared a wonderful life. I hope the raw edges of your heart have healed somewhat. I’m so sorry for your and our loss of this fine person.

Diane and family, What a wonderful tribute. Such a great loss for you. May your friends and family and God, bring you comfort. I used to see you at UBC. Sincerely, Susan Vaughan

Thank you for the breadth of details of this wonderful man’s character. I am so glad you found each other. When I knew you in the 90s, I had no idea of either of your lives. But I’m glad we walked a little way together. Blessings to you.

Daniel and I both laughed out loud learning that he cited himself, with name spelled backwards, in one of his papers. How wonderful. What a lovely tribute. We love you both so much and are so sorry for your loss.

Bill lived an incredible life full of family, love and laughter. I knew he loved hotdogs, good coffee and you. Thank you for sharing a glimpse into your life with this wonderful man and I hope precious memories will gradually fill the hole in your life left by Bill's passing .