“Fun for all at a later date” 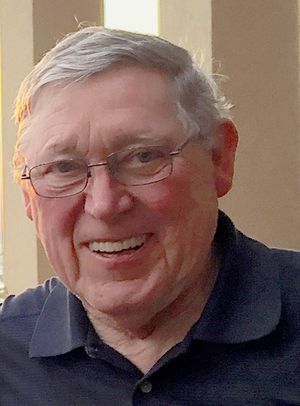 When Tom died our family, and indeed the world, lost a kind and gentle Irishman.  For the past year Tom suffered from ODTAA (one damn thing after another), before dying of B-cell Lymphoma.  With the help of Evergreen Hospice, we were able to care for Tom until he died at home on May 6, 2021.

Tom was born in Dublin, Ireland and was educated there, graduating from University College Dublin (UCD) in 1959.  He then started a great adventure, going to Prince Rupert, B.C. as a volunteer 4th grade teacher.  After two years he moved to Edmonton, Alberta where he entered the seminary; in 1965 he was ordained a Catholic priest for the Vicariate of Prince George, B.C.  When assigned to Terrace, B.C.  he met Kathy, a volunteer nurse at the local hospital, and the sparks did fly!

In 1968 Tom entered graduate school at the University of Washington, eventually receiving his Ph.D. in Educational Psychology.  The rest of his career was spent at the UW Medical School where he spent many years with the WAMI program.

Tom and Kathy married on January 9, 1971, and had three children:  Ciara, Nick and Beth.  He was a terrific Dad who had unbounded love for his family.  The worst tragedy he endured was Ciara’s death from an asthma attack when she was fifteen.  Nick and Beth were his greatest comfort, and the arrival of Lily, his only grandchild, gave him immense joy.

Tom is survived by his wife Kathryn (Kathy) Sutton Cullen, his son James Nicholas (Nick) Cullen, his daughter Elizabeth (Beth) Sutton Cullen Ledoux (Kevin), and his adored granddaughter, Lily Ledoux.   He also leaves 3 sisters and a brother in Ireland, and numerous nieces and nephews in Ireland, Canada, and the United States.  He was loved by all he met, and his laugh and smile will forever be missed.

May the road rise to meet you.

May the wind be always at your back.

May the sunshine be warm upon your face.

May the rains fall upon your fields.

And until we meet again,

May God hold you in the hollow of His hand.

Tom was a very smart and gracious man who exemplified the qualities of his homeland Ireland, Land of Saints & Scholars. His personal warmth and wonderful sense of humor as well as his devotion to his family were precious qualities..................Pat Callahan, SEATTLE GROUP of resigned priests

Uncle Tommy, you will be missed. Thank-you for so many memories, adventures, fun and laughter.

Joe and the Fay Family,
Sally and Sean and the Roche Family.
Sheila Cullen, Ciara and the Filan Family.
Brid and Kevin, and the Jennings Family,
Bob and Siobhan, and the Cullen Family.

Tom was a wonderful friend -- always shining bright with the best outlook. He was a very caring person. We always looked forward to our times together. We will miss him so much.
Our love goes out to Kathy and Tom's family.
Dave and Gail Parrish