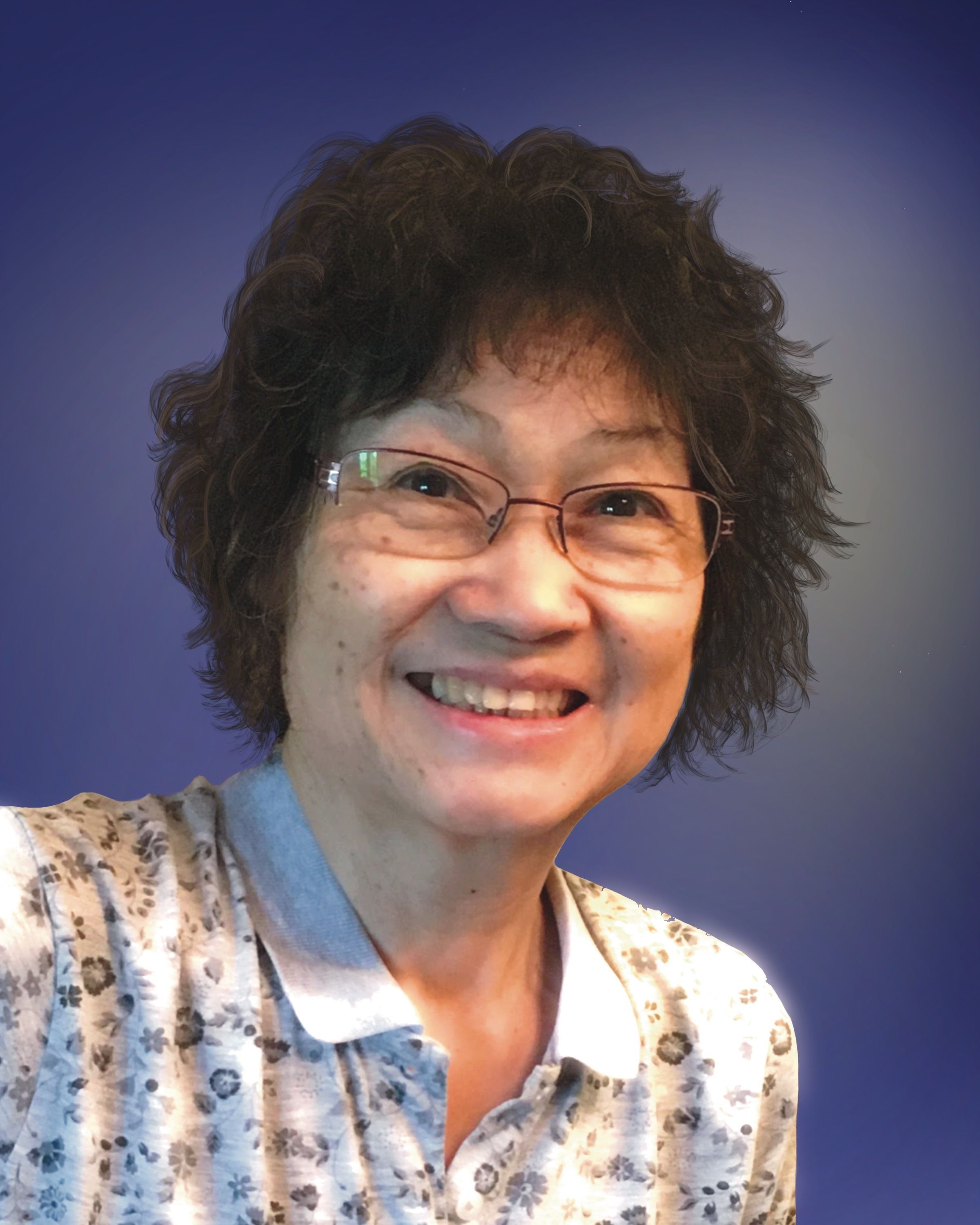 Mei Mei Lee Sum was born on July 21, 1945 in Toisan, Canton, China. Her parents were Ping Lee and Heung Wong. Mei Mei was their oldest child. Her younger siblings were Mei Bo, Mei Ying and Kwok Keung. In 1949, they had to abruptly leave China on foot as the Communists took over China. Mei Mei remembers taking the long journey to Hong Kong while carrying her baby sister on her back when she was only 4 years old. In Hong Kong they struggled to start a new life, yet they were all together like so many in Hong Kong who shared the same challenges.

Mei Mei attended a Catholic school for her primary education, where she affectionately remembers the kindness of the nuns who taught her. Her education was cut short when she began to work to help the family at age 12.  She had many jobs throughout her youth, but her prevailing skill was sewing and needlepoint. As a young adult, Mei Mei was also a part of the Hong Kong Police Force from 1964-1966.  It is hard to imagine that a person so sweet and compassionate as Mei Mei could be a police officer, but she was and was also very proud of it!

In 1966, she married Chuck Hang Sum. They lived a humble life in Hong Kong and added 3 children to their family: Chu Kwok, Ting Kwok and Fung-Ki (who they named David, Alexander and Diana upon arriving in America). On March 23, 1973, their family of 5 left Hong Kong and immigrated to Seattle, WA. The extended Sum family was there to help them with their new life. Yet everyday, Mei Mei missed her family in Hong Kong.

Life in America was a great opportunity, in spite of all the struggles and hardship for a young immigrant family. They had to adapt to their new surroundings and learn a new language. Thankfully, they had the Seattle community of Chinatown to help them form a new foundation where they met many new friends who became like family to them. Mei Mei quickly found work in the garment industry as a seamstress. She was thankful for the childhood skill she learned in Hong Kong. She sewed for great local companies like the famed Roffe Company who was a leader in ski wear in the Northwest. She also worked for Seattle Q and also Thaw, INC whose client was REI. It was not easy to make ends meet, so Mei Mei often held 2 or 3 jobs. For a time, she worked for a lady who grew bean sprouts in her basement; she managed the packaging crew for Salmon Bay Fish Company; she even stuffed ads for The Seattle Times. Motivated by her deep care for her 3 kids, she worked tirelessly in hopes that they would make the best of their American education and rise up.  Alex and Diana both went to the UW, becoming the first in their family to get BA’s.

When the family was able to move to Beacon Hill in 1980, it was serendipitous. A neighborhood lady knocked on their door one day to visit. She heard that a new Chinese family moved into the neighborhood, so she wanted to pay them a visit and invite them to church. The next week, Mei Mei and Diana began attending Chinese Baptist Church. Going to CBC helped rekindle the Christian faith Mei Mei was introduced to as a child. It also provided another great community who blessed her and helped her grow in her faith. She was baptized at CBC, attended bible studies and participated in many of the Women’s events. Her church participation and renewed faith proved to be a huge influence on Diana who became a Christian in 1983.  This foundation later impacted Alex who also became a believer in college. Mei Mei’s faith sustained her through many troubles and storms in life. Her daughter Diana remembers one of her many sayings, “any steps forward that I take, God has already taken care of. He answers my prayers before I can even speak them. He is always there for me.”

Mei Mei has many joys in life: she loves a good buffet (Royal Fork is one to remember!), she loved karaoke, she loved to be with her friends having a good meal, she loved to play mah jong because it was also a great social time with friends and she loved to go to dim sum! However, there are 7 great joys and loves in Mei Mei’s life that truly blessed her soul…her grandchildren. Josiah (24), Emma (23), Faith (20), Malia (18), Evangeline (15), Jayci (14) and Jared (13). Like any grandparent - she doted on and adored each one. She always made sure that they were overfed and they each lit up her eyes and her heart. Especially in her last days, when she was in much pain and discomfort, she gathered up every ounce of strength when a grandchild came to visit her. She waved at them, squeezed their hands and lit up her eyes just for them.

On June 23, 2022, Mei Mei Lee Sum took her last breath on earth and was called home to heaven. She is now resting in the arms of Jesus - fully healed and with a new heavenly body that is free from cancer and suffering. She can now rejoice in glory in the presence of God who lovingly and carefully watched over her days on earth. She is home now and in His peace. Mei Mei is survived by her 3 children: David, Alex and Diana (Irwin); her 7 grandchildren; her mother in Hong Kong, Wong Heung who is 96! Also, her sisters Mei Bo, Mei Ying and younger brother Kwok Keung (wife, Mei Ling) and many nieces and nephews.

A Celebration of Life service will be held on July 15, 2022 at 10 am at Chinese Baptist Church. In lieu of flowers, donations can be made to:

Thank you, Di, for writing this obit for mom, for us. It is beautifully written. Bless love you, sis.