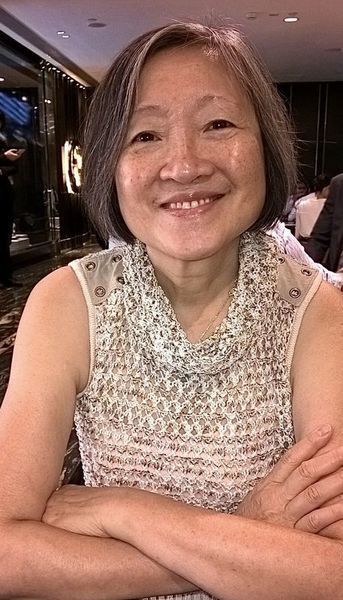 Theresa was born on July 28, 1945 in Hong Kong, the sole daughter of Kwan Kim Sing and Kwan Lam Suk Yin's five children.  She found sisterhood with her two female cousins, Suzanne and Georgina, whose families joined Theresa's to become one large extended family.  Theresa attended elementary and high school at St. Mary's Canossian College in Hong Kong, where she was lovingly nicknamed Cutie.  She showed promise in creative writing, and after winning a contest for an English writing competition, she decided that she could tackle high school and college in the United States.  She applied for a passport without the knowledge of her parents and notified them of her pending departure against their wishes once she got accepted into Mount St. Mary College in Newburgh, NY.  Theresa charmed all her new American friends and continued her education at Georgian Court College in Lakewood, NJ, spending holidays with Cousin Philip Chan's family in Long Island, NY and a summer waitressing in a diner on the Jersey Shore.

After returning to Hong Kong, Theresa met and married Dr. Lawrence Chan with whom she had two daughters.  During that time, she became active in pushing for recognition of spousal abuse in Hong Kong with media and radio educational promotions.  She also worked extensively for factory worker rights in Kwun Tong.  When her marriage ended, she spirited her daughters from Hong Kong so they could get the same educational opportunity as she did.  This time, she followed her brother, Bill and his young family to Chicago, where they helped Theresa's family acculturate.  When her daughters got accepted into boarding schools on the east coast, she decided to follow them, settling in Rhode Island, close to her other two brothers, Bernie and Dick and their families. With the kids out of the house, Theresa decided to further her education by enrolling in the Master's program in Social Work and Counseling at Boston University.  This degree led her into a 20 some year worldwide career in the field.

The stars aligned when Bill's friend from Chicago, Peggy Tan, introduced her to a co-worker, Steve Fellows from Billings, MT, who told Peggy that he would like to meet someone with two daughters.  As Peggy recounted, "She was the only woman I know who is crazy enough to fly with Steve in his little airplane."  The couple married less than a year after they met, logging many hours in Steve's plane; thus, commenced an around-the-world adventure from New York City, to Hong Kong, then to South Korea.  The couple finally settled in Seattle, where they have spent the last 16 years waltzing, salsa and tango dancing into a new community of friends.

Theresa's life was defined by her commitment to helping others, an example set by her parents.  Not only did all her friends and family sought her for help and advice, but Theresa always worked with local social service and counseling agencies wherever she lived, benefiting mostly Chinese communities throughout the world.  Theresa's other loves include eating gourmet foods in noteworthy restaurants and occasionally, the dingy hole-in-the-wall that passed her standards.  She traveled around the world with friends and family, always impeccably dressed like a "style icon".  As a patron of the arts, she attended many concerts and performances around the world.  She also enjoyed taking long walks and even longer drives wherever she chose to travel, even if it took her some time to figure out which side of the road is the right side.  Raised as a city girl, she nonetheless embraced all the outdoor activities inherent to her Montana in-laws, such as riding, hunting and skinning deer.  Throughout the years, she and Steve hosted numerous huge dinner parties, opening their home to friends and family alike.  As the years passed, she transformed into an adoring grandmother and doting great aunt, as well as a wonderfully patient caretaker to her mother.  She will be missed most for her independent spirit, generous and patient nature, as well as her beautifully serene smile.

In lieu of flowers, the family is requesting donations to a favorite charity of your choice.

A celebration of Theresa's life will take place virtually on February 5, 2022 at 5pm PST.  A link will be forthcoming.

Very well written - full of information and highlights of Theresa's life (and even humour on her driving skill). The obituary reflects Cutie's (schoolmates' nickname for her) wonderful spirit and love of life which touched and influenced everyone that has contact with her, whether remote or close. She is also beautiful, with a smile that melts my heart. I will miss her and think of her frequently.
Longtime friend Linda Tong from Hong Kong

Cutie left us all stunned with sorrow. We have learned from her to embrace all good moments in our lives. She was a gift to us, then taken, with no warning. Months ago, we enjoyed her messaging, driving with Steve, between Oregon and Seattle, reporting about weather and traffic, sometimes knowing that her favorite sushi was awaiting. She beamed with pride about the fact that she enjoyed cleaning up while Steve cooked delicious menus. She told us stories about Charmaine and Charleen, and advised us never to meddle with our children and their lives. We followed her trip with Charmaine to HK, to honor the grandmother, even including her hotel meals through quarantine. She was her jolly self and epitome of good health!
Most of us started school with Cutie in our preteens. Cutie and I became fast friends when we both ended in the US the last year of high school. We were together quite a bit, into our young adulthood. We met from time to time during various stages of our lives. She was the ‘coolest’ among us, and forever a fashion icon, which I looked up to. Yes, her signature smiles, that ray of sunshine, now dimmed, but never forgotten. Rest in Peace, dear friend, WE MISS YOU!

Dear Theresa
The world has lost a wonderful person. But we know you’re in a much better place.
The memory of your friendship, your beautiful and serene smile will live forever in my heart and mind.
RIP dear friend.

Theresa was an amazing and inspiring woman with a beautiful soul. She will be missed by so many. As she was a testament to her parents’ influence, her daughters are a testament to hers. Being friends with one of her daughters, Charmaine, for more than 30 years, it is clear to me that Theresa’s love and care for others, her adventurous spirit, and her determination to make a difference in this world in whatever way possible will live on. May she rest in peace and her memory live on through all of us who have been graced by her time on this earth. With love and gratitude.

I met Cutie at a young age. We went to the same school in Hong Kong.
I was very pleased to have reconnected with Cutie when she moved to Seattle WA. We used to meet for lunch.
Cutie was a beautiful, kind and considerate human being.
I will always cherish memories of our friendship.
"Nothing is really lost to us as long as we remember it."

Cutie and I were classmates from a very young age at St. Mary’s in HK. We were also Girl Guides on the same Troop. We all shared great times and adventures together till she left to continue her studies in the US.
We did have a few reunions till we all got married and I kind of lost touch with her from the 70’s thru 80s., unfortunately.
Thanks to the great technology age of the 90s, we got reconnected. The dawn of the age of “Instant Gratification” coined by our dear Sister Ida from St. Mary’s!!
That was shortly after Steve and her got married. I could feel the joy and happiness in her words from the emails we exchanged. (Steve, she cherished every moment with you, even flying in that little plane. )
We have enjoyed our encounters in HK whenever we happened to be there at the same time. Since then, we have kept up with our friendship, thanks to social media.
I am especially grateful, that my husband and I had the opportunity to meet Steve, Charmaine and Hery some years ago when they visited New Mexico.
Cutie will be greatly missed, she already is.
She will always be remembered as that girl with the “sunlit smile”!!
Missing you already.

I will always remember you as the first person I met in Hk with a soft spoken voice and beautiful smile.
RIP my dear friend.

What a beautiful tribute of this inspiring soul.. and this photo wholesomely encapsulates her!

I’ve known Cutie for over three decades. Although we haven’t kept in touch, my children Sandra and Dennis have frequently kept close contact with their 姑媽 and of course her children, Charmaine & Charleen! And boy! do they look up to their cousins!!

Especially Sandra, she obtained her private plane pilot license (at 17) because of Steve and his family in Montana. Forever Grateful. It’s comforting that Sandra did spend some quality time with her aunt 姑媽 and cousins in Seattle right after Thanksgiving.

May your soul Rest in Peace- Cutie

With much gratitude and love,
Cathie Ho Nadeau