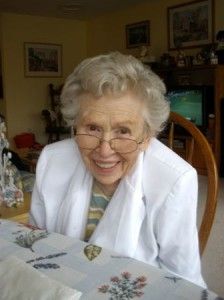 Mary Jean (Coad) Daley, 88, passed away peacefully in the early morning of January 25, 2014 of natural causes. She was born on September 9, 1925 to Samuel Blaine Coad & Marguerite Wellington in Seattle, WA, where she lived her entire life. She attended University Heights Elementary, and graduated from Holy Names Academy, class of 1943. She attended the university of Washington from 1945 – 1947. She married the late Robert J. Daley in 1950. They lived within a wonderful Lake City neighborhood that included “the pool” where she thought of everyone involved as part of her family. She began her working career at the Alaska Communications System, followed by years of service for the IRS, retiring in May 1991. Once retired, she enjoyed traveling and saw Europe, Russia and China as well as many other wonderful locations. She was a longtime member of St Georges Episcopal Church where she formed many life-long friendships. In her retirement years she volunteered at her church, community and the local food bank. She practiced unconditional love, welcomed everyone into her home and loved to host holidays, Sunday dinners and BBQ’s. She is survived by her children Paul (Cathy), Steve (Sue), and Cheryl (John), grandchildren Jeremiah, Levi (Laura), Kyle, Sean, Drew, and Sam, great grandson Felix, brother Tom Coad (Sharil), sister-in-law Marie MacPherson, former son-in-law David Gronhovd (Sue), and numerous nieces, nephews, and many-many more whom she counted as family. Special thanks to Elizabeth, Juan Carlos, their kids, and the staff at Morningside Residence for the wonderful care they gave her up to the last moment. Memorial services will be held Saturday February 8th, 3:00 PM at St Georges: 2212 NE 125th St., Seattle, WA 98125 followed by a reception. In lieu of flowers, donations can be made to The Alzheimer Association www.alz.org/alzwa/